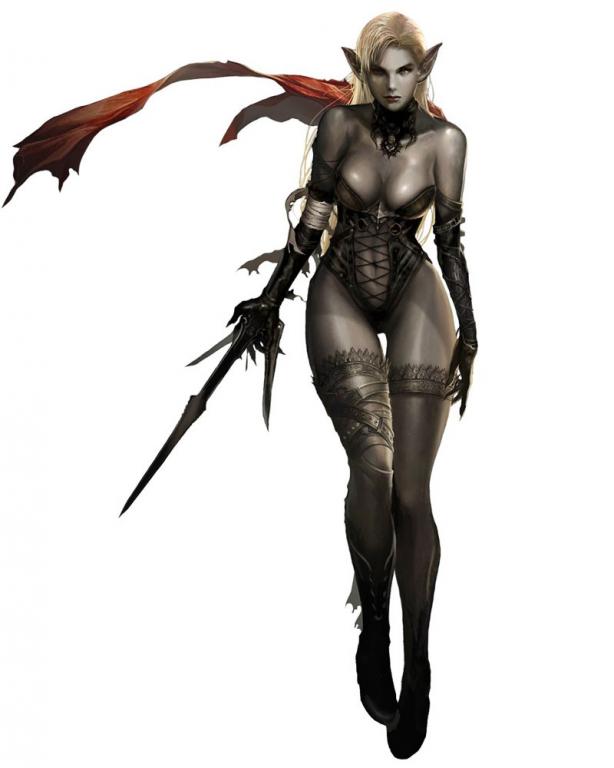 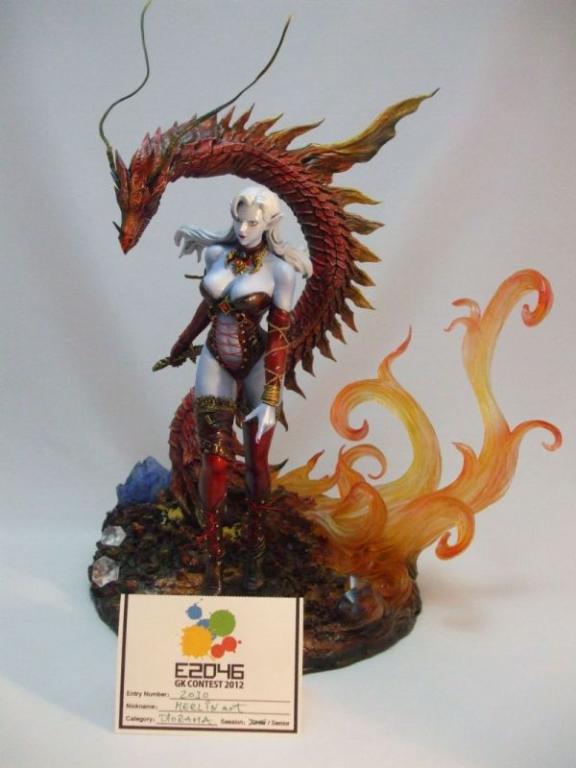 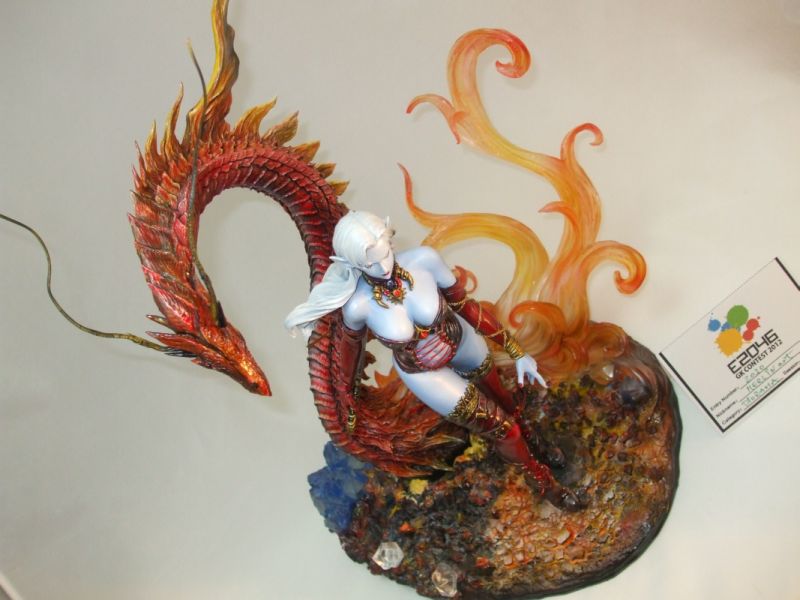 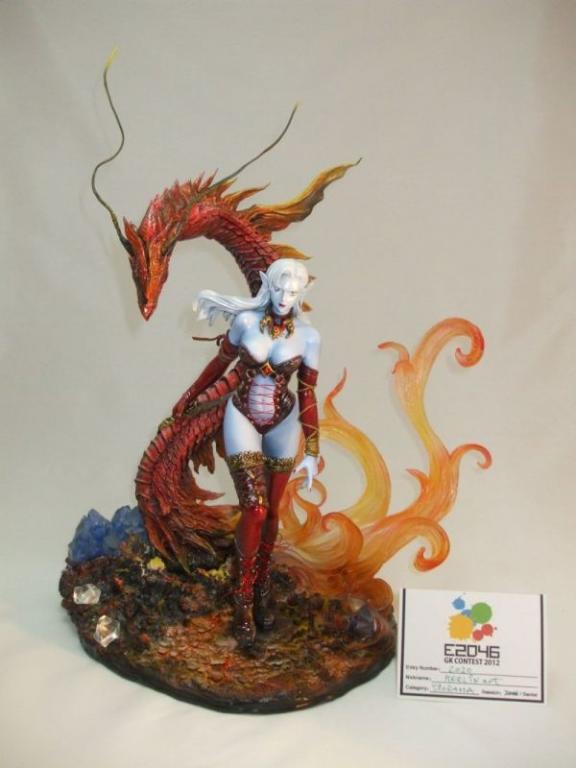 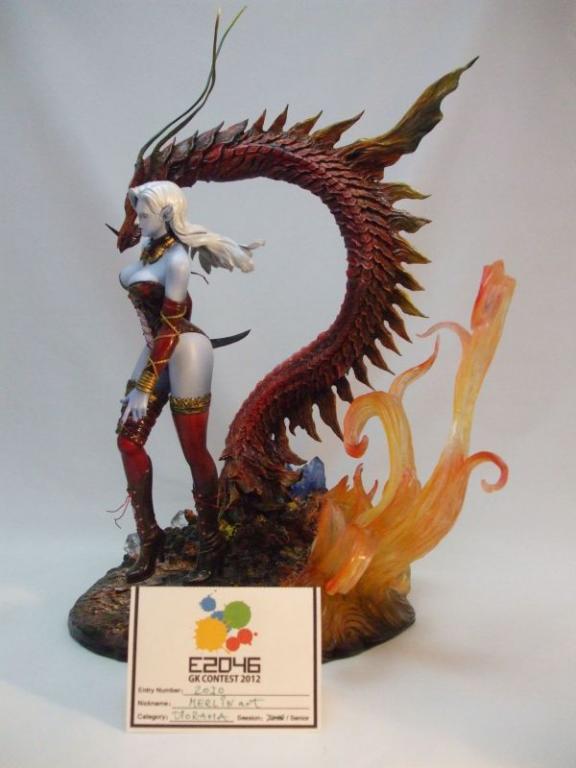 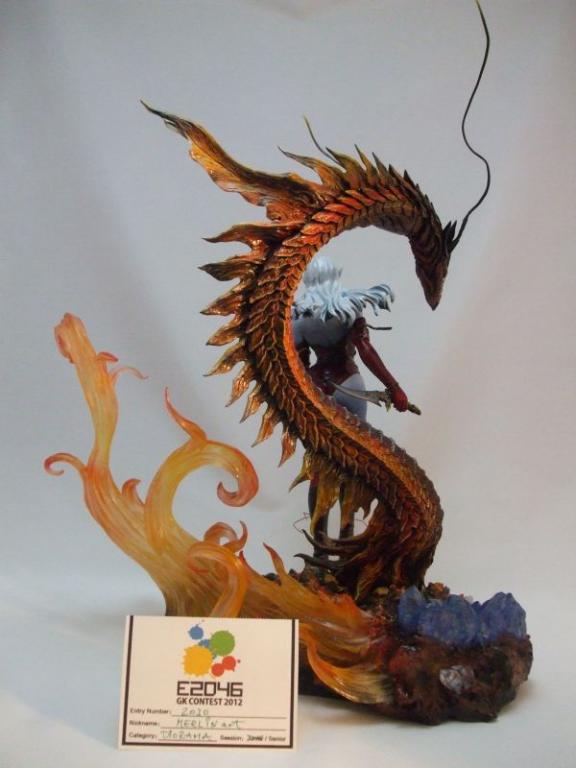 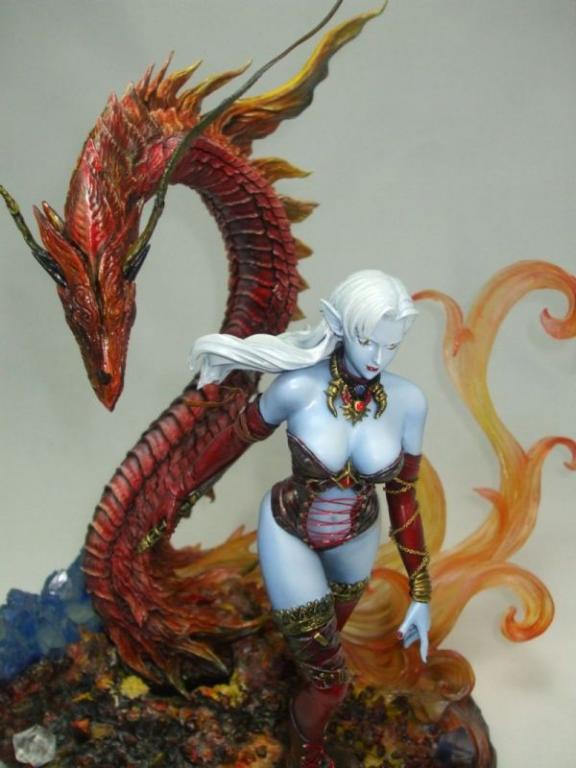 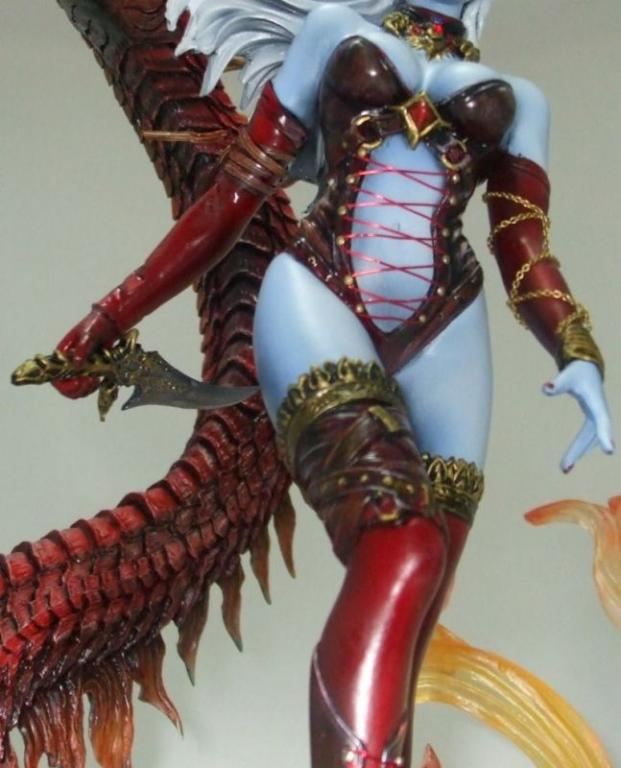 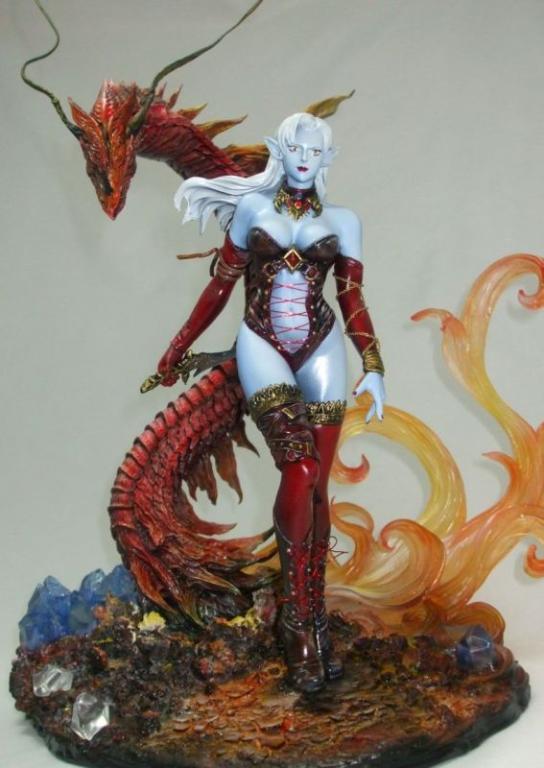 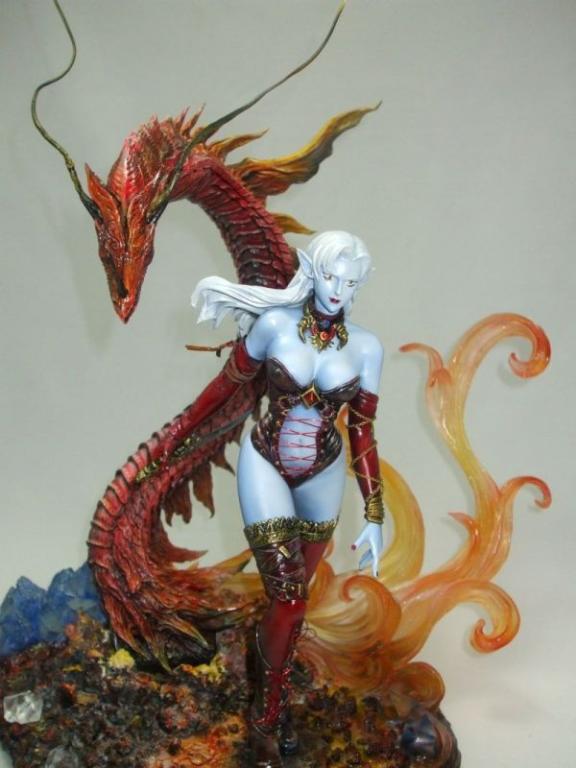 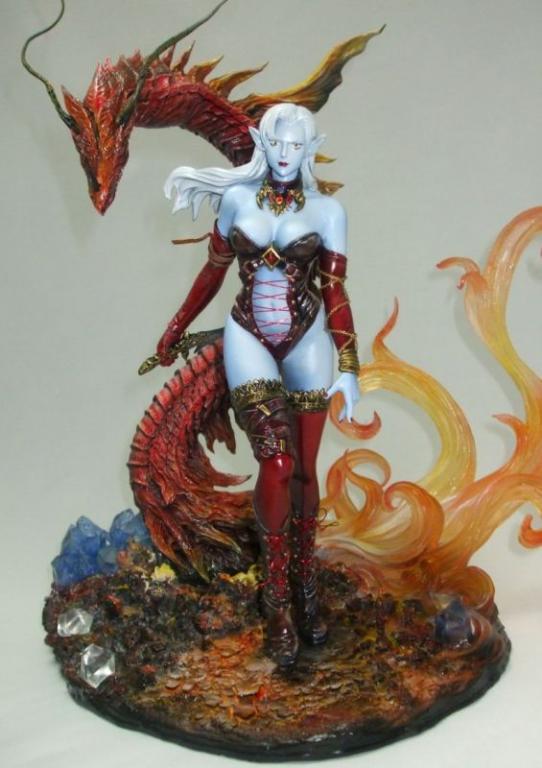 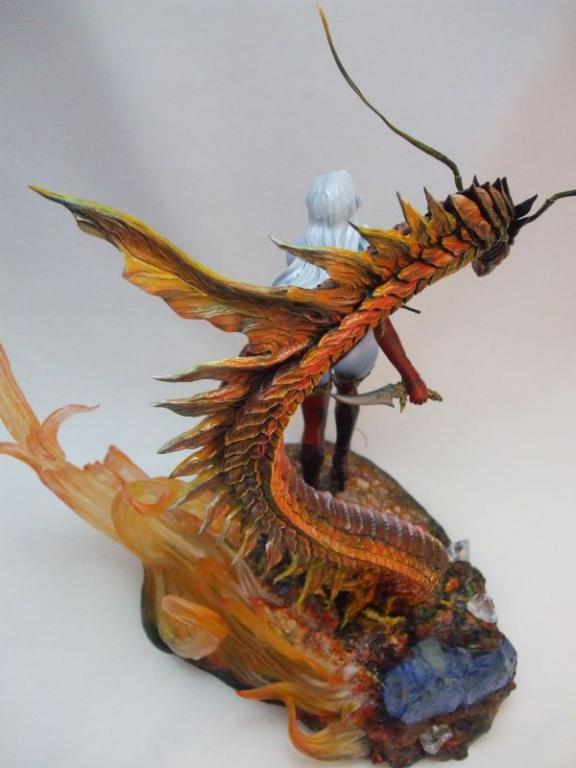 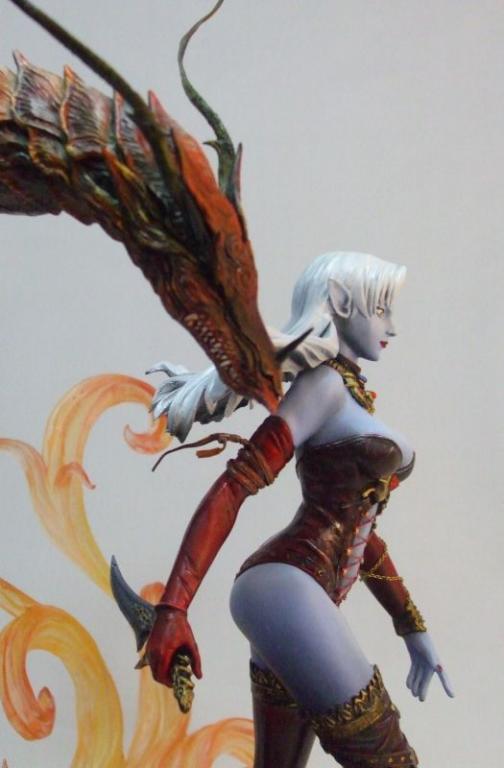 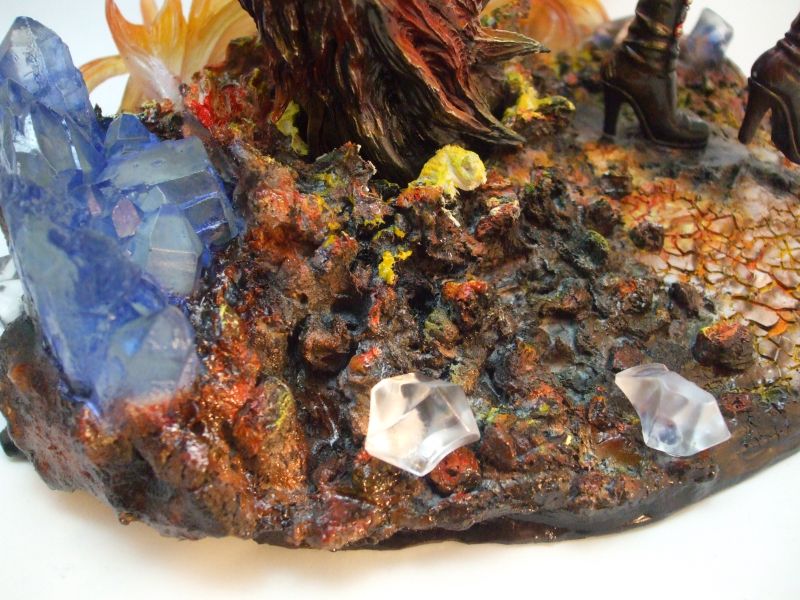 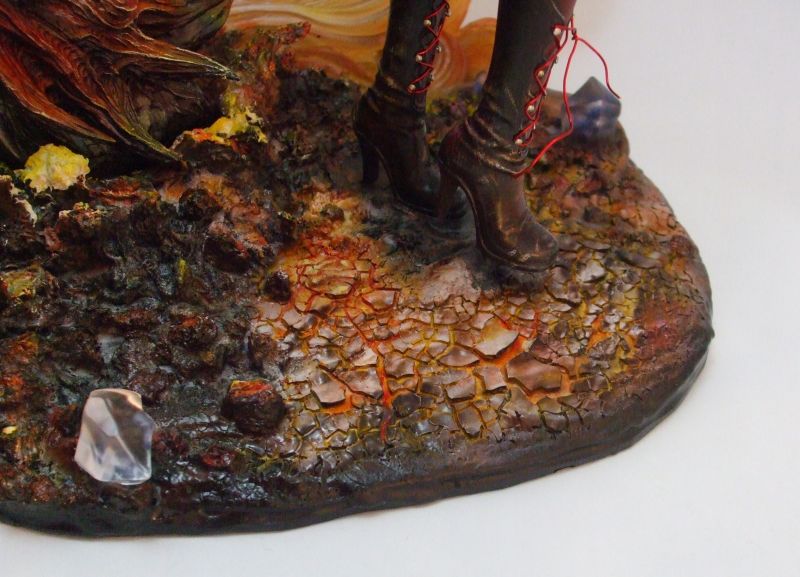 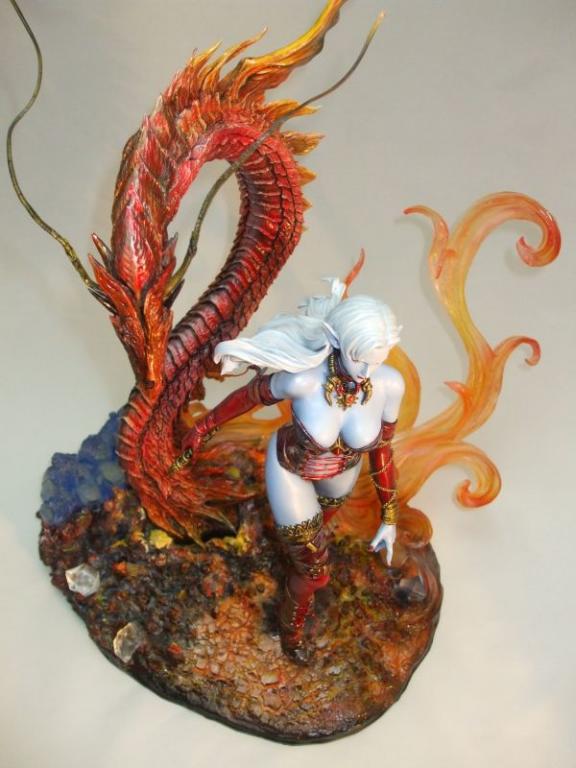 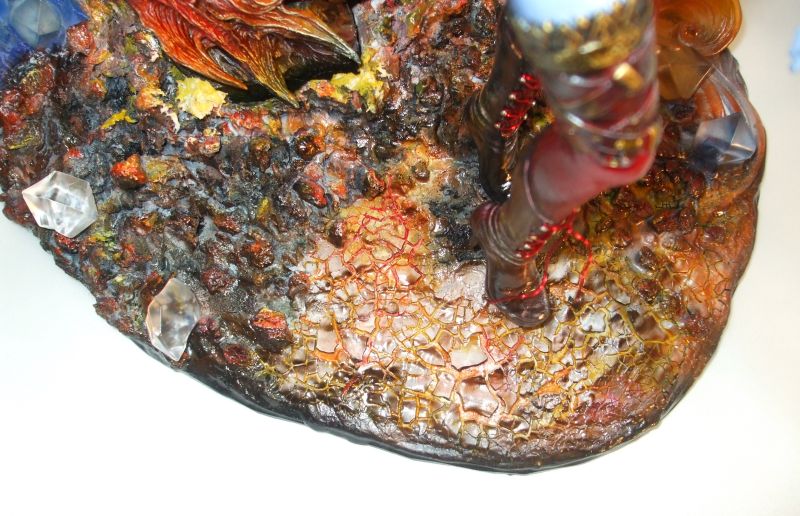 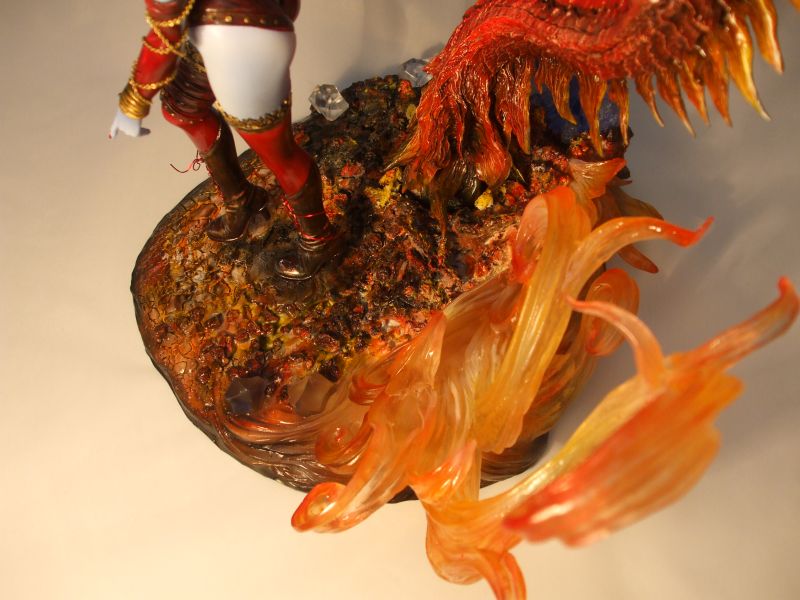 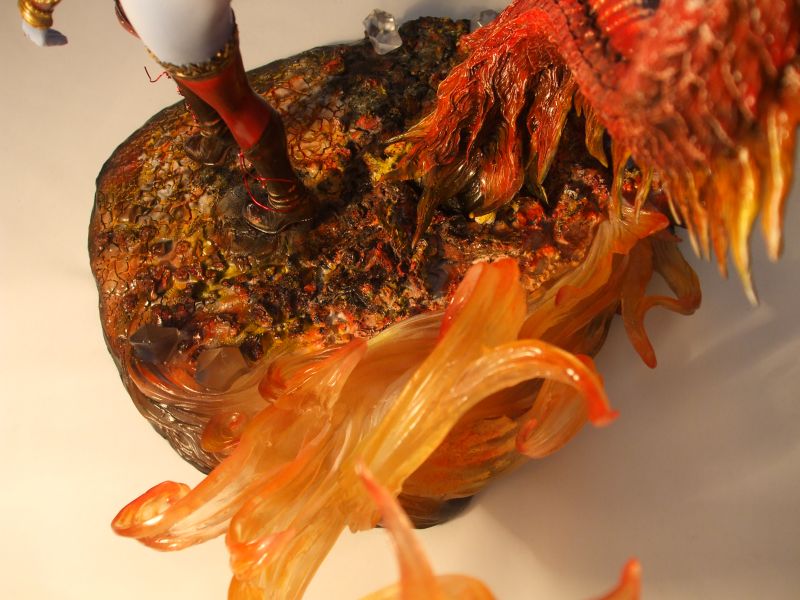 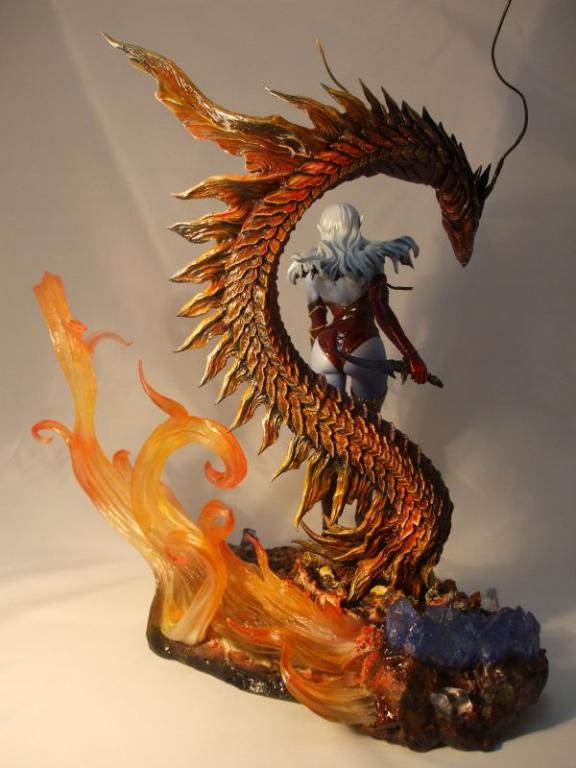 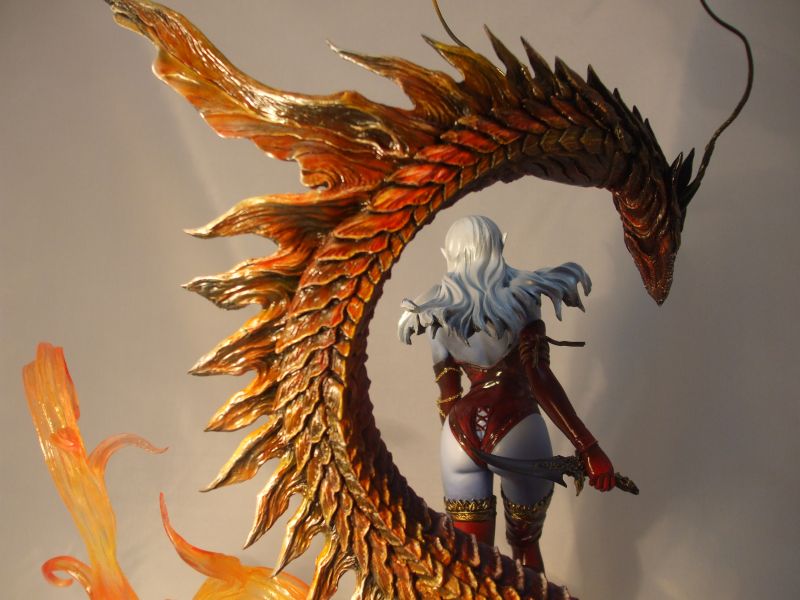 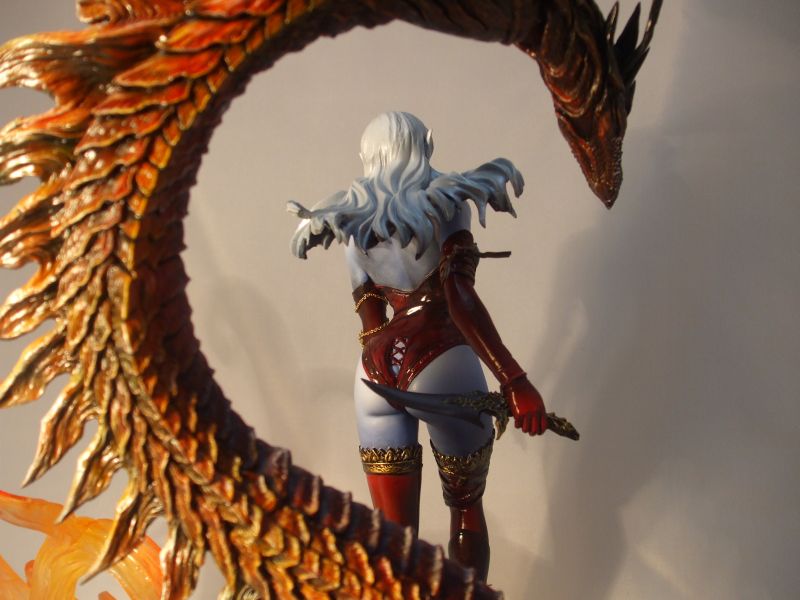 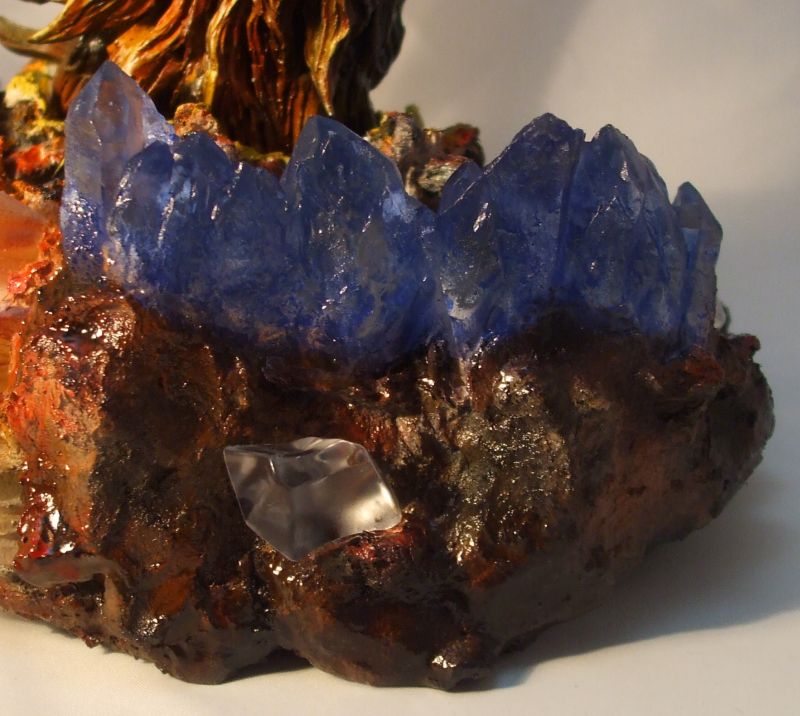 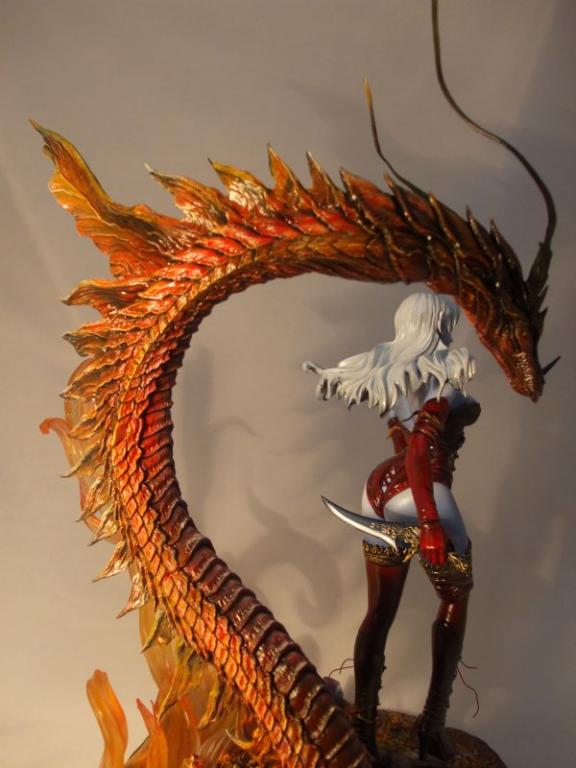 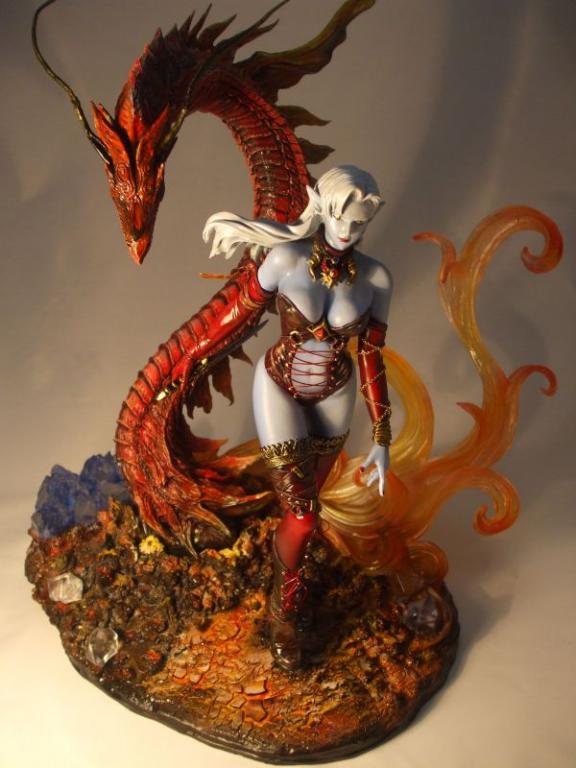 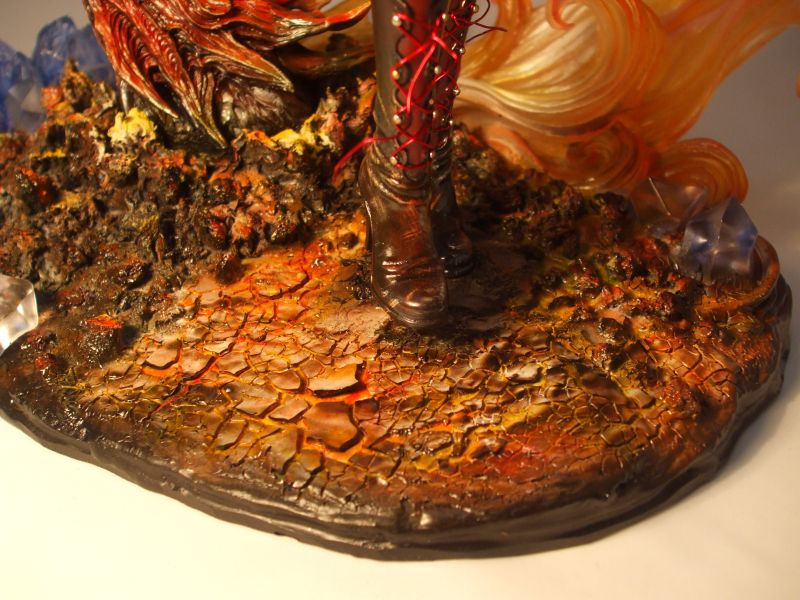 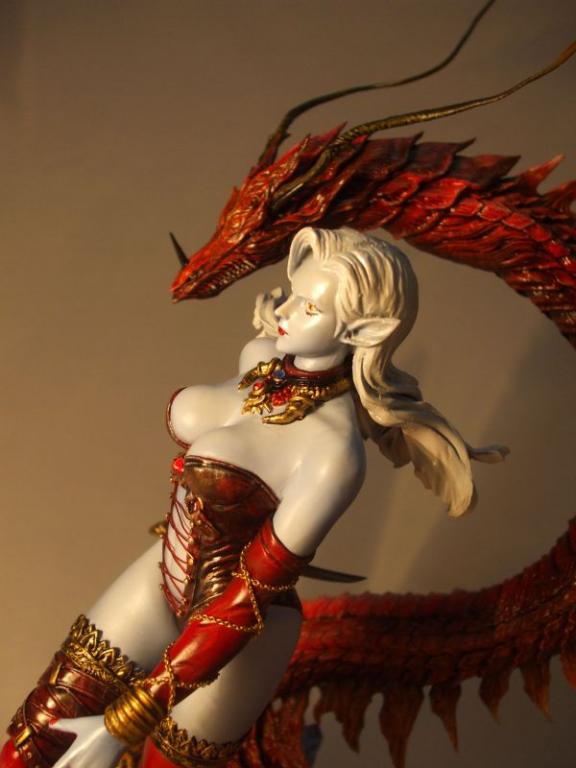 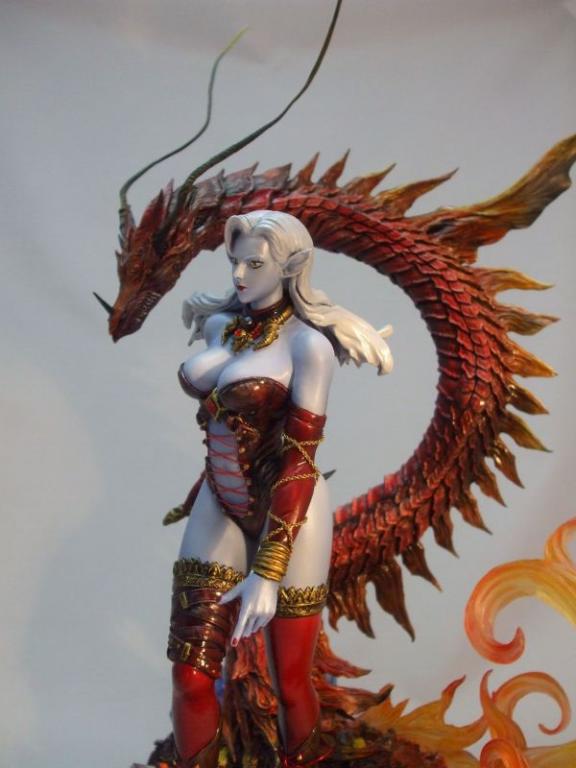 Pele – Goddess of fire Hawaiian Volcano Goddess The Myth (idea): Pele is described as \"She-Who-Shapes-The-Sacred-Land\" in ancient Hawaiian chants, the volcano goddess, She, was passionate, volatile, and capricious. She is said to be the Goddess of lighting, fire, dance, violence and most of all volcanoes. She is known for her sightings amongst the mortals. Pele will sometimes appear as a beautiful young sexy woman or an old ugly woman. She is well known for he shape shifting powers and can be anything she wishes to be. Realation: For the diorama came when I saw a TV report about Hawaii and the Goddess of this wonderful Island. In the end it was much more work than ever imagined. Not to mention that the Elf Assassin needed much changes to look like the artwork you see as first picture here. For this diorama I used two complete different GK PKKING Sturgeon King & Elf Assassin to create something new and really unique.

Excellent job...the goddess is amazing!! I like the "power effect" of the dragon...great!! Good luck for the contest!

Thank you very very much for the beautiful message you wrote, I also really like your job, I love your colors a lot.
my compliments merlin-art
good contest 2012

Thank you all for the nice comments! I'm really happy that you like this years entry.

Very pretty setup. The dragon is amazing, I love all the details that show up when properly painted. The clear parts and the base are awesome too. The only thing is that the Elf isn't nearly as detailed; maybe some drybrishing on the strands of her hair would've helped to bring it out more. The color of the suit is lovely but it alost blends with the dragon and I find it hard to notice when looking at the entire piece.

Excellent job the figures and details on base brings the the hole thing to life. It Looks Amazing!

The effect of beautiful stones and fire, the dragon looks alive
compliments

the colors are stunning! great idea and fantastic work!

That colors look really beautiful! Specially I like the base!
Nice idea for the diorama! 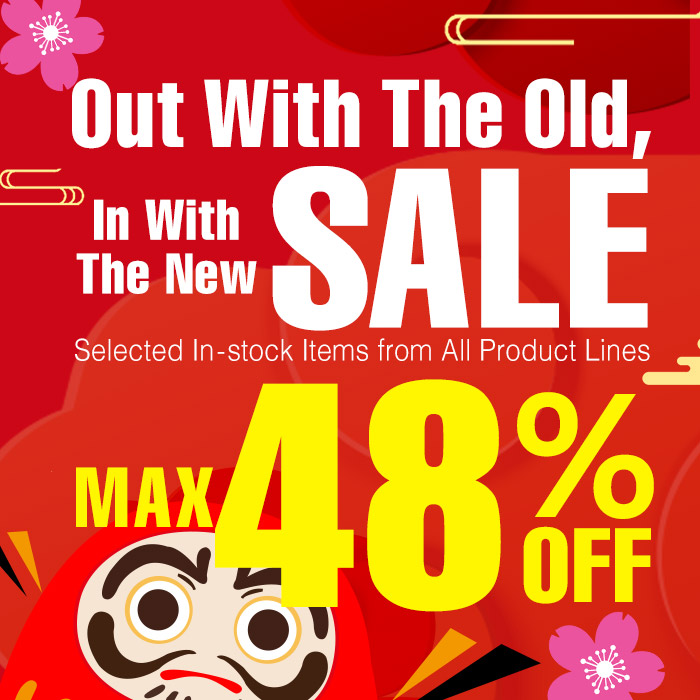