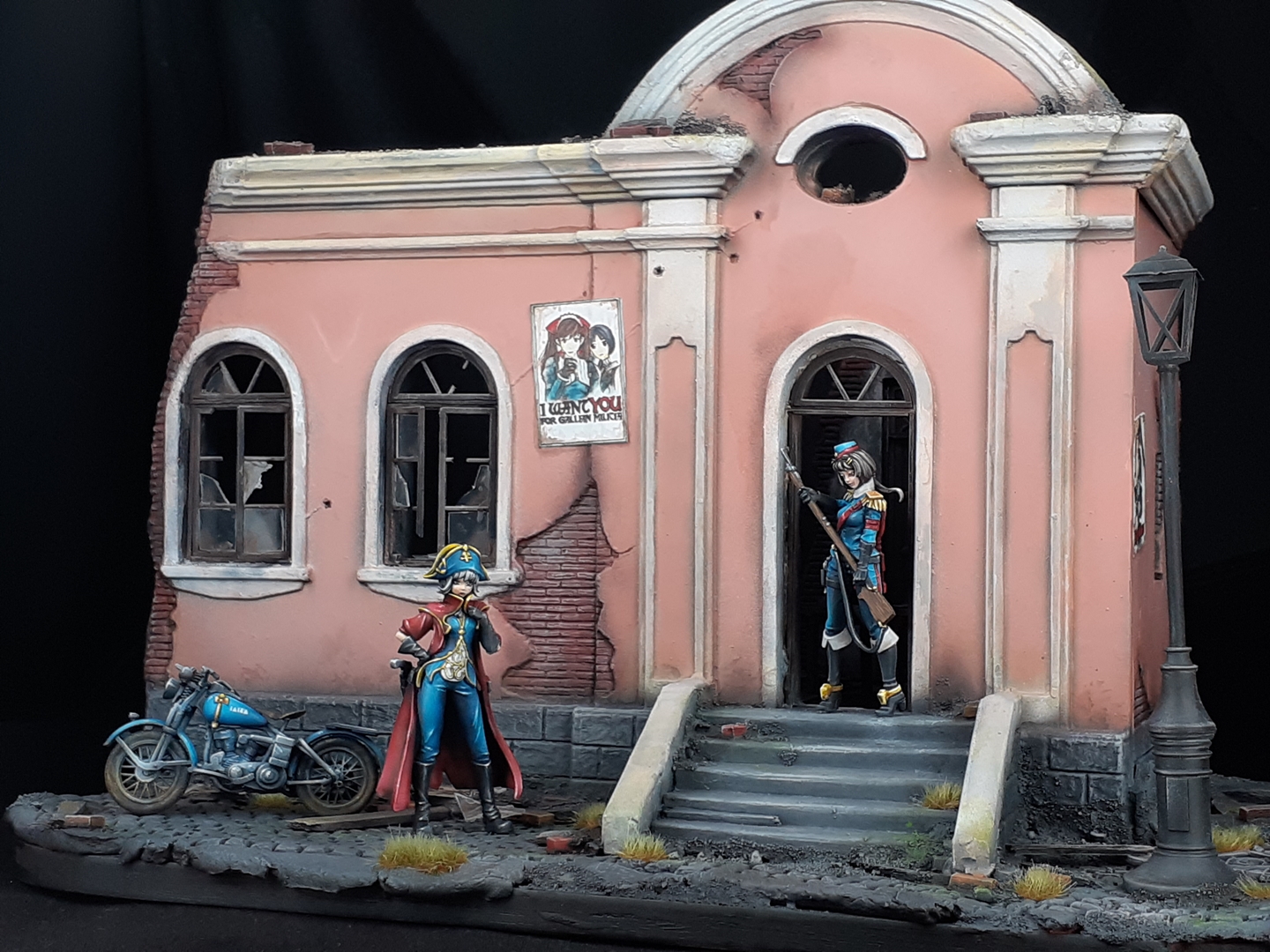 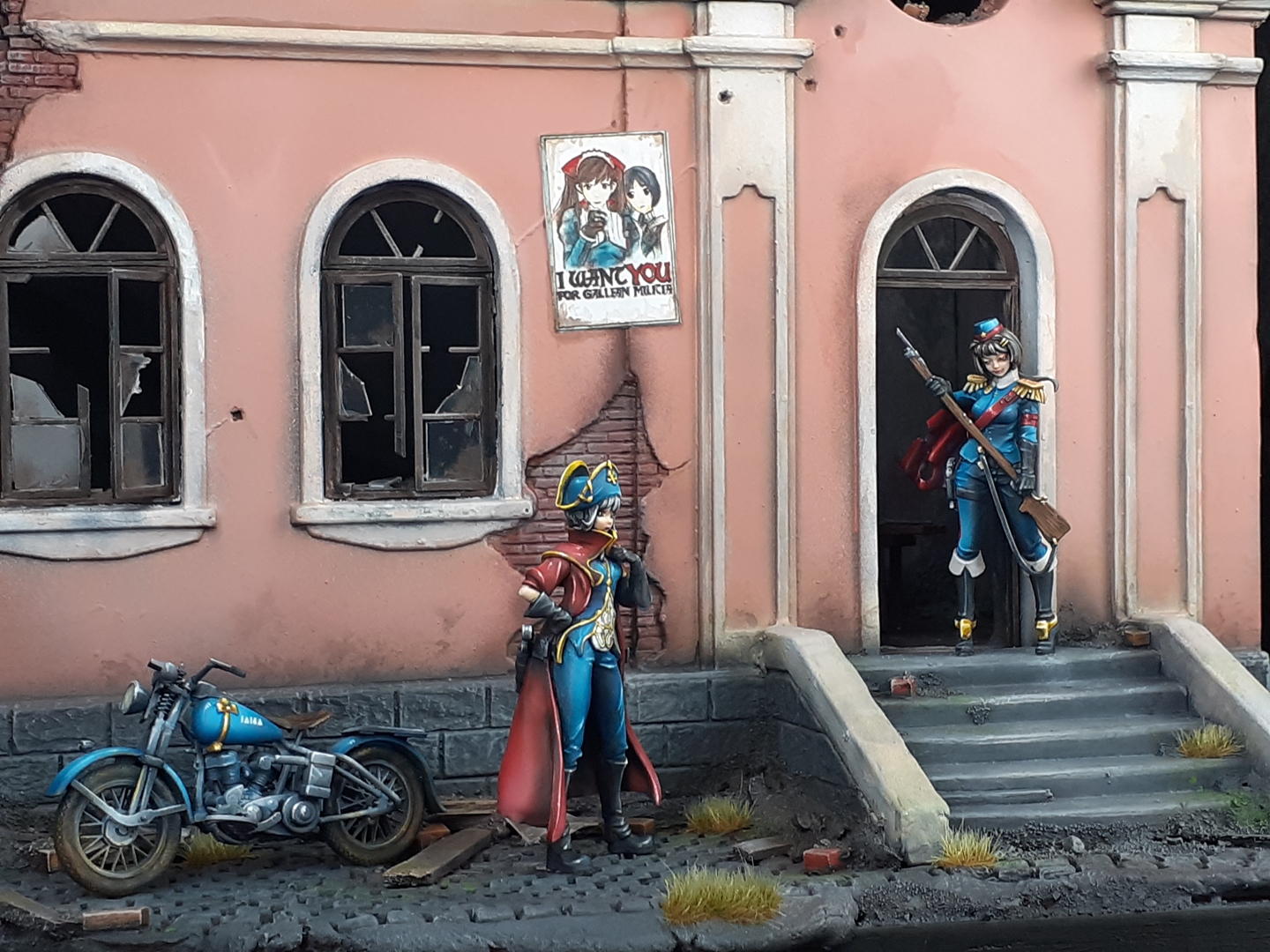 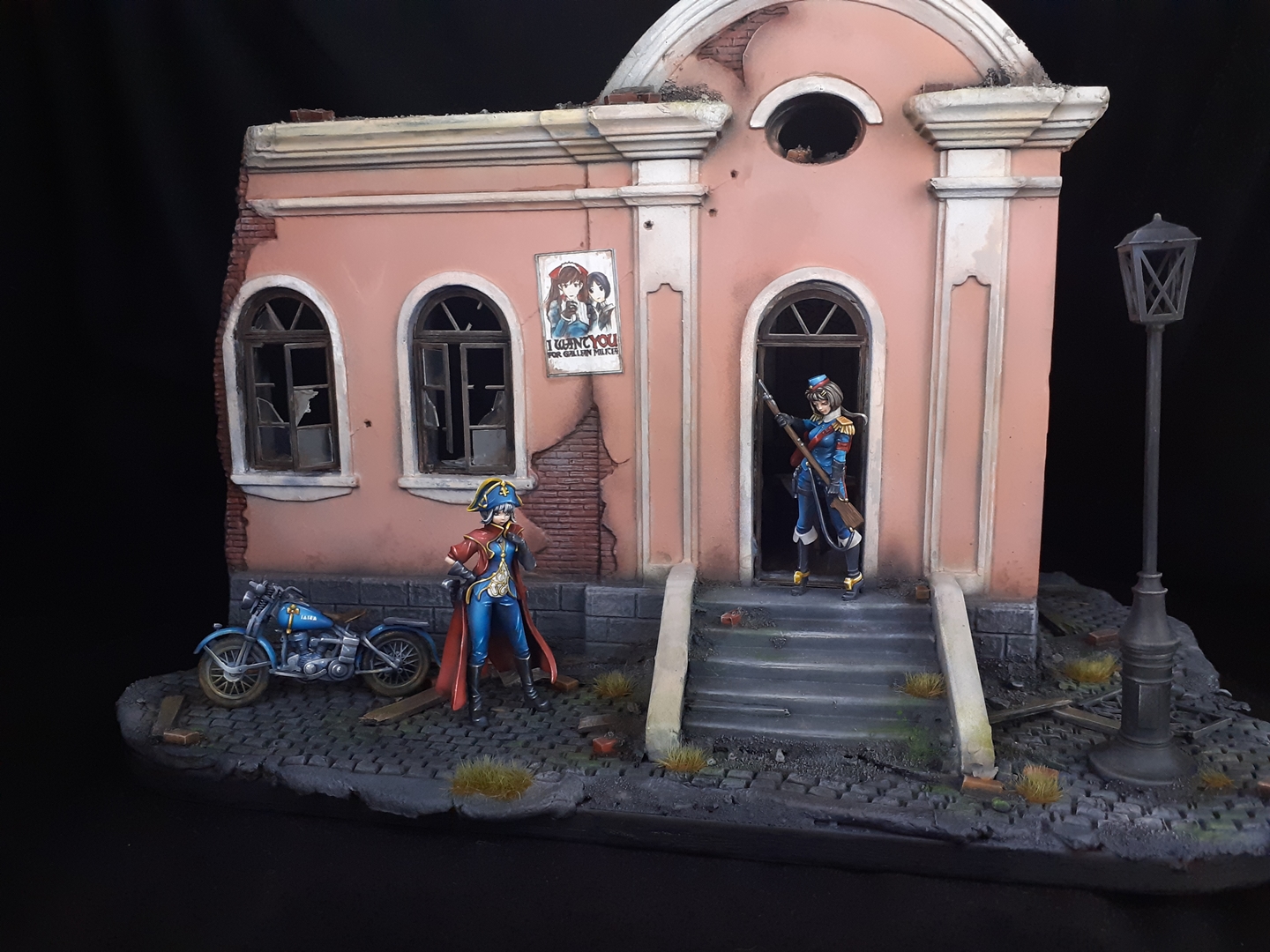 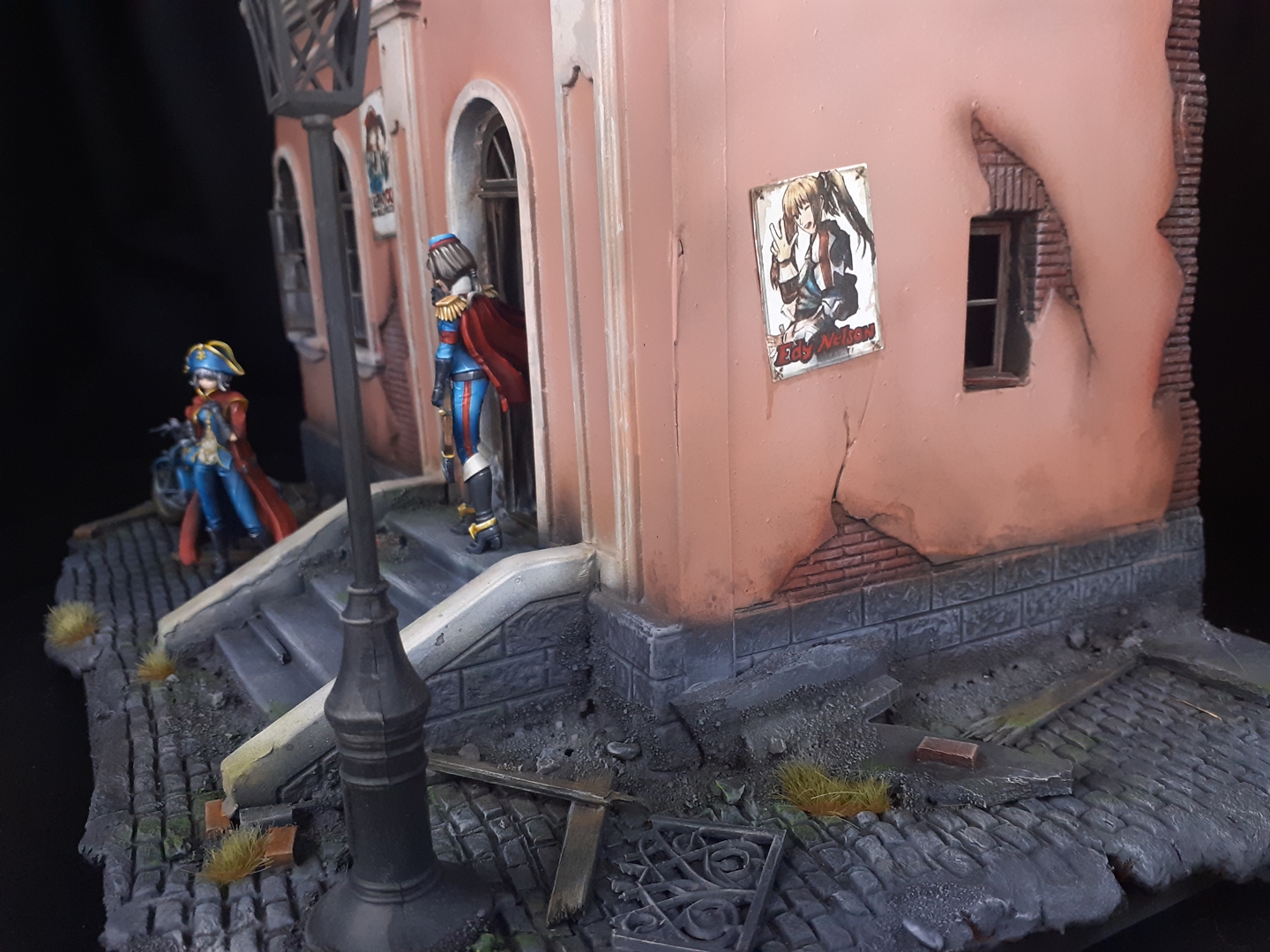 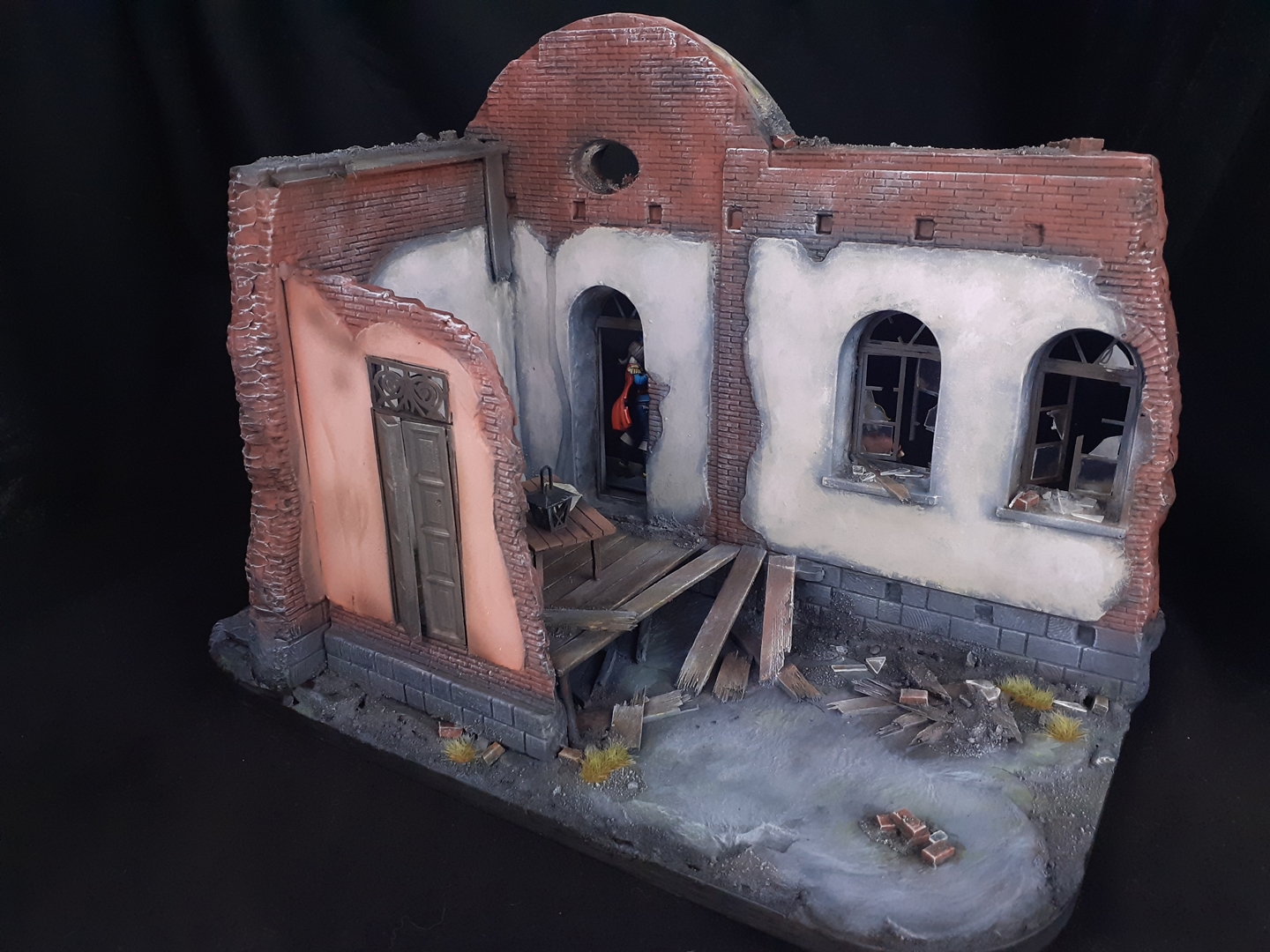 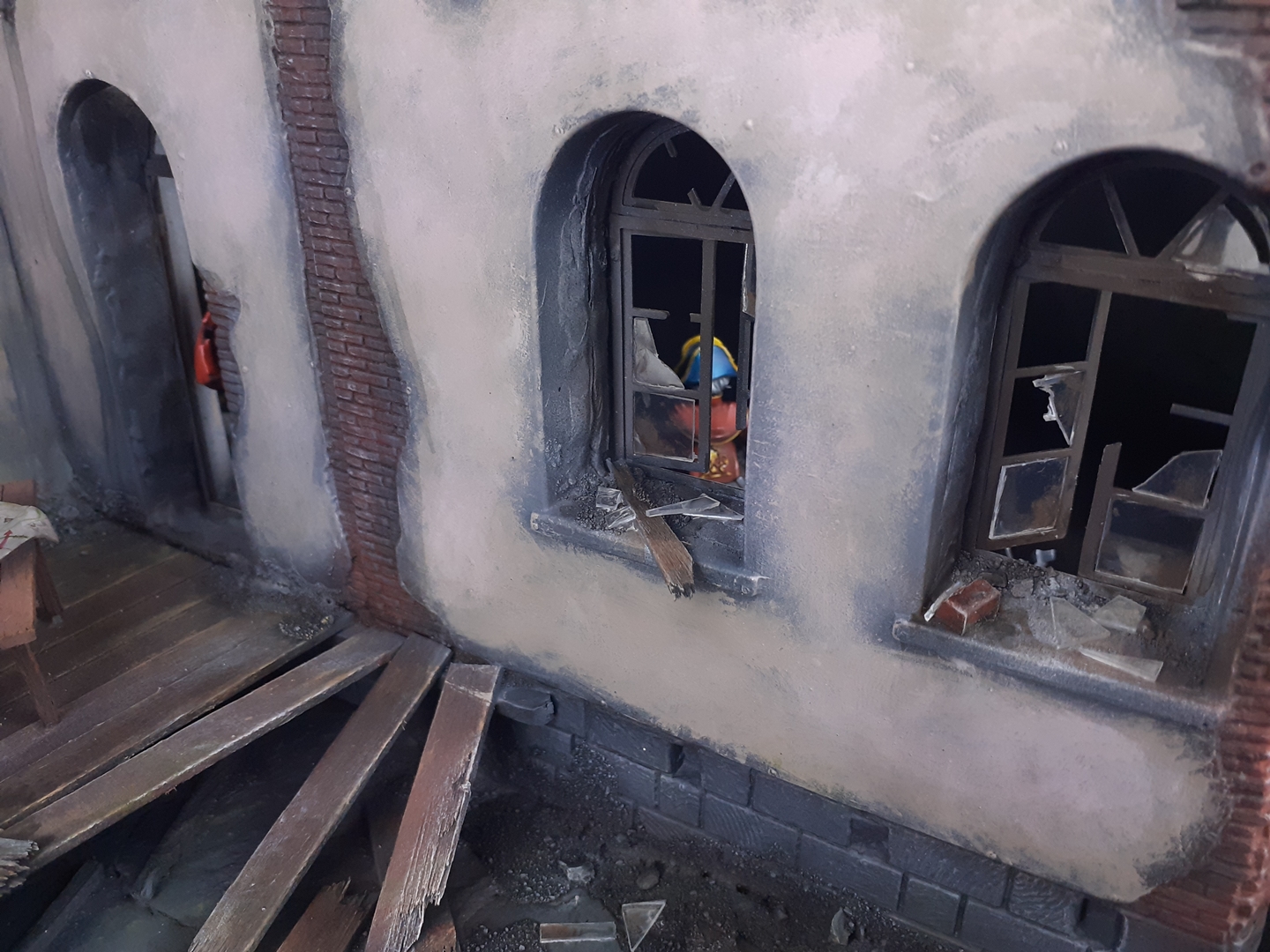 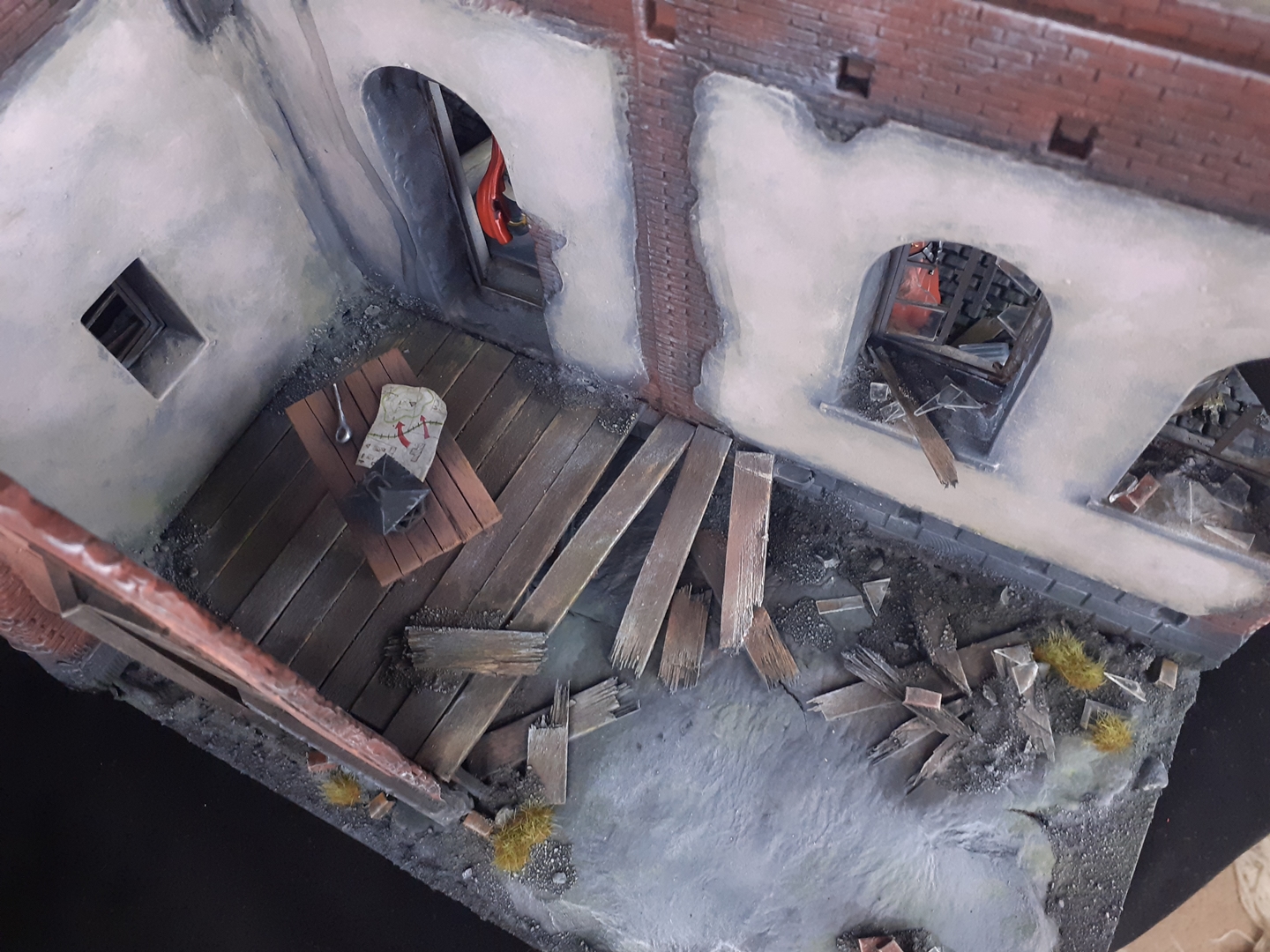 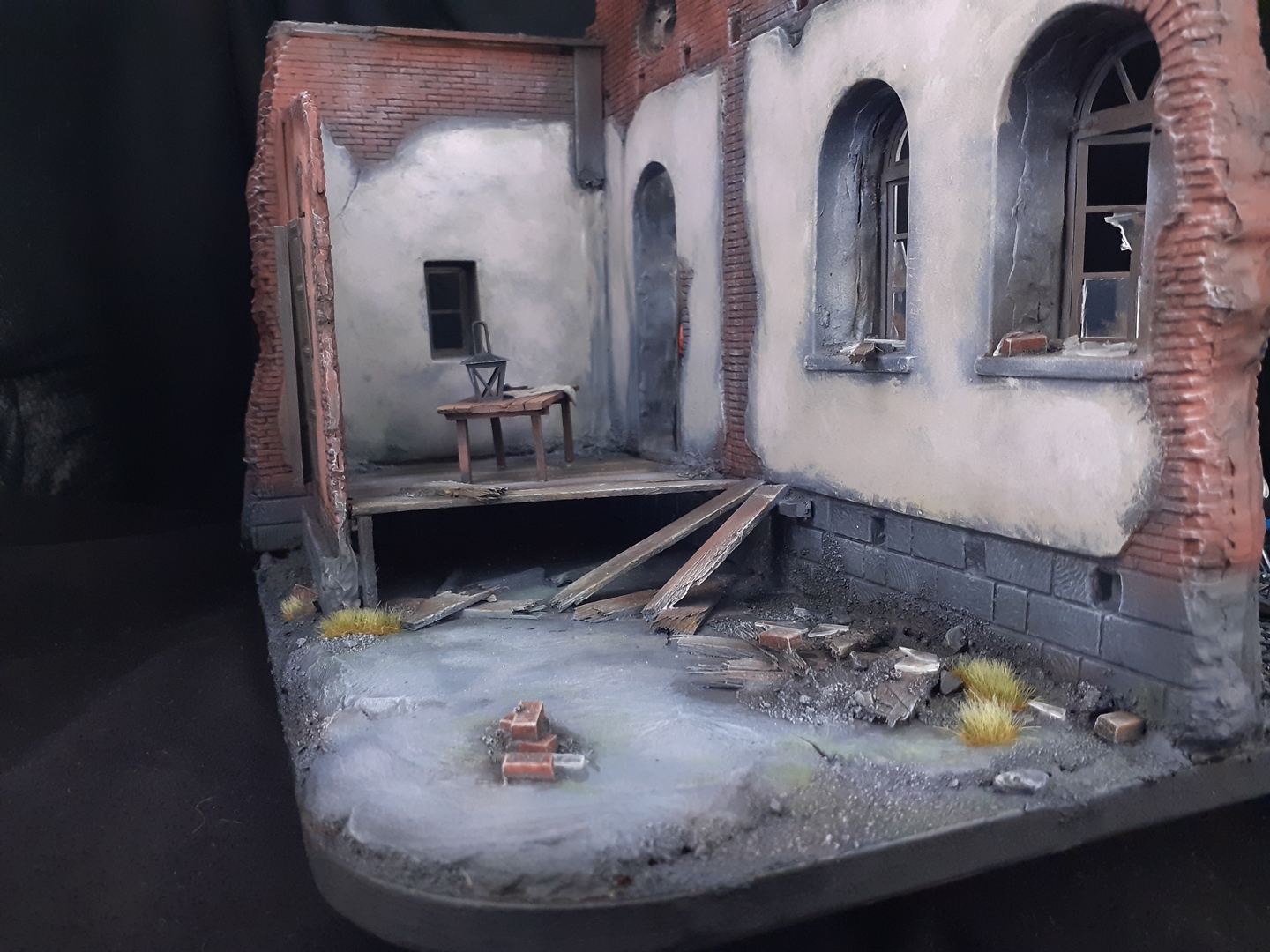 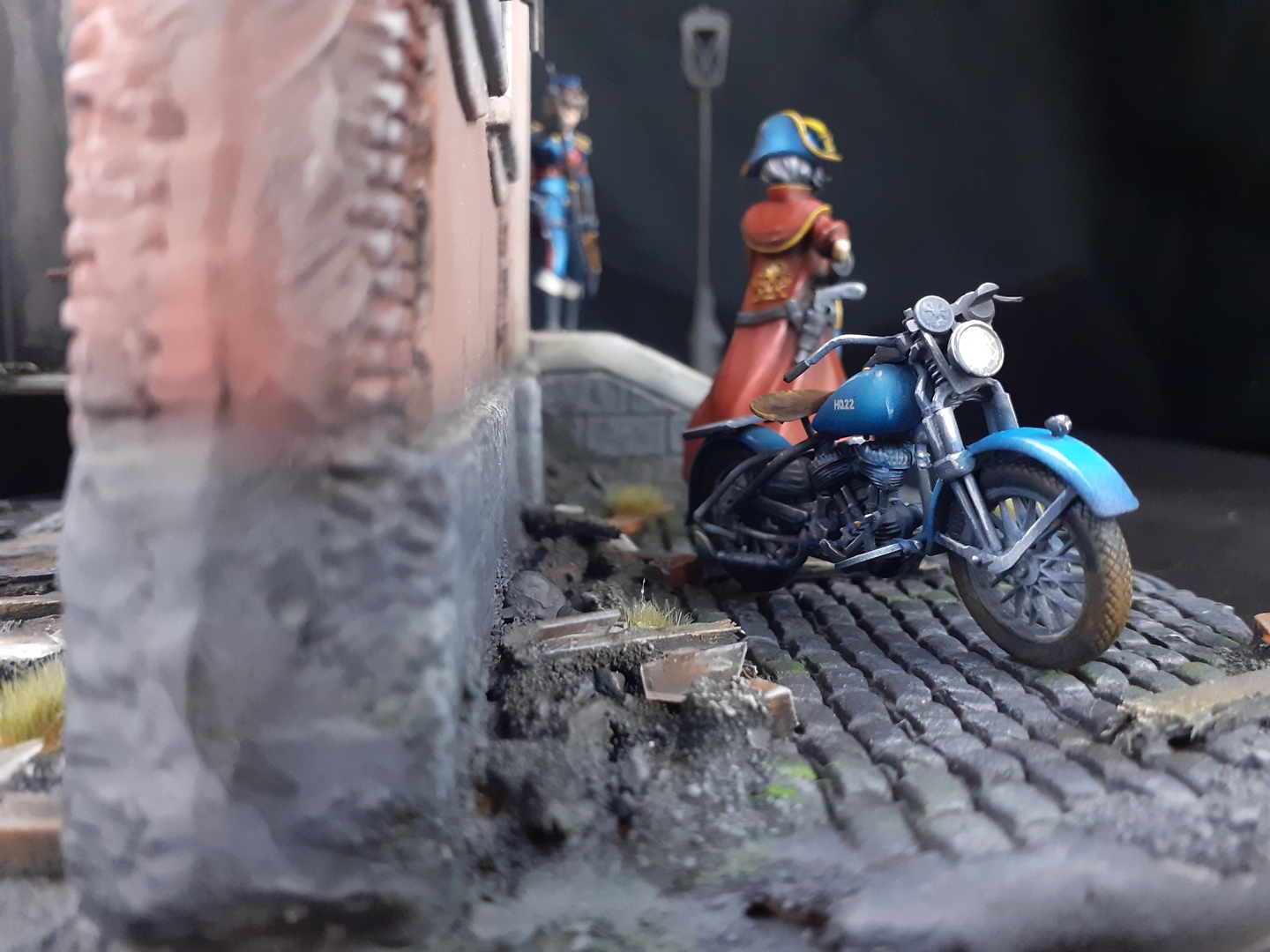 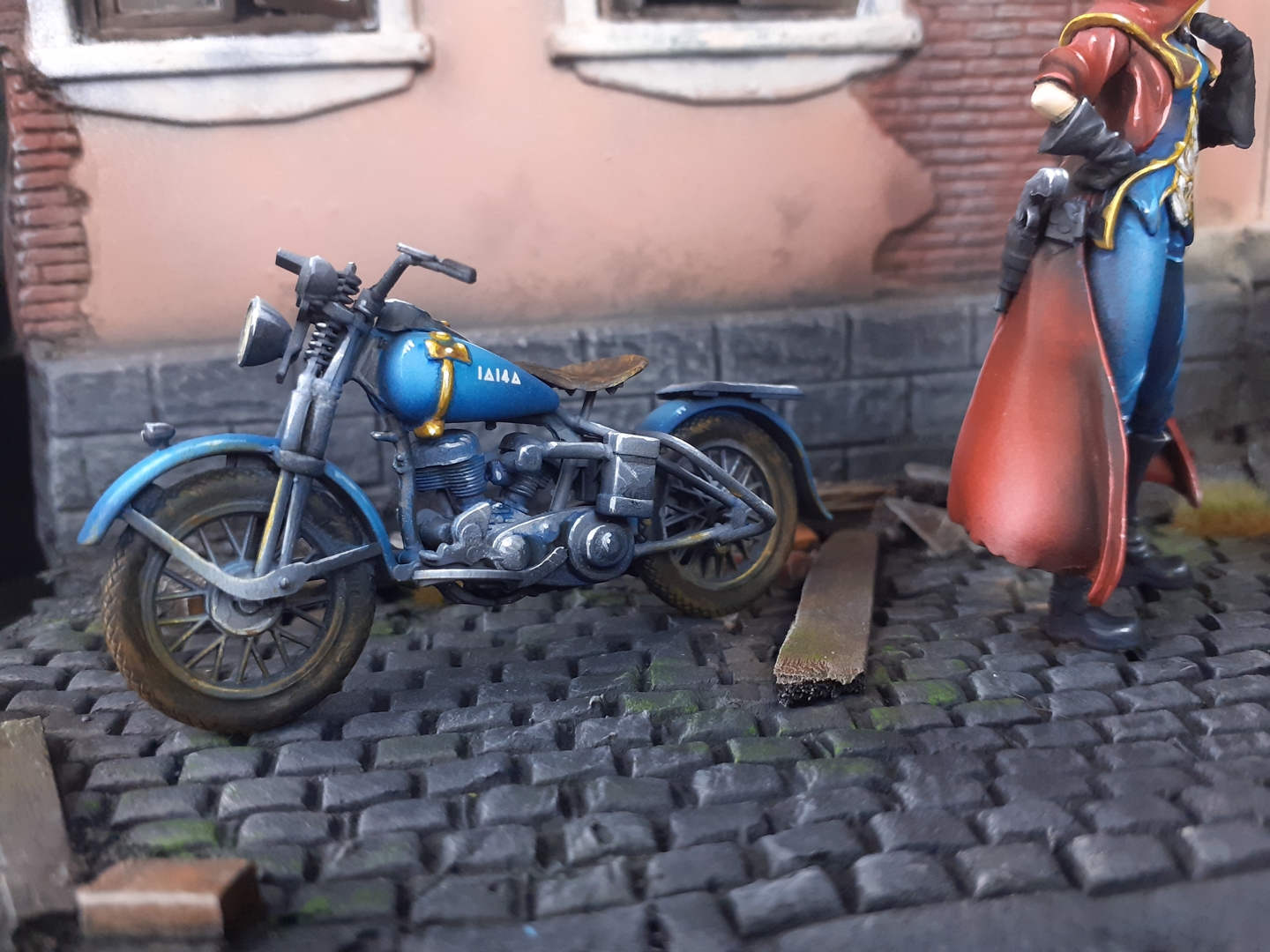 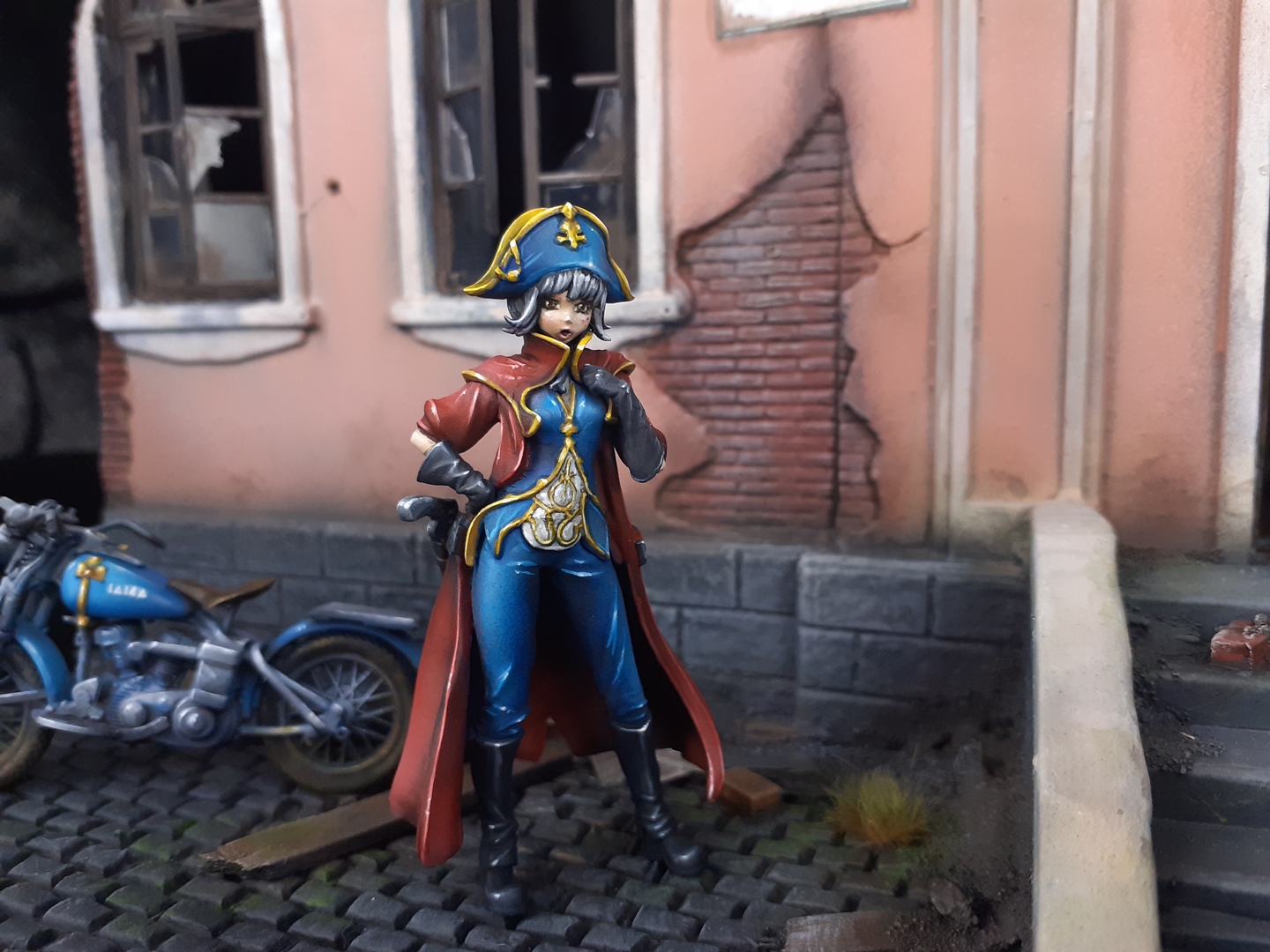 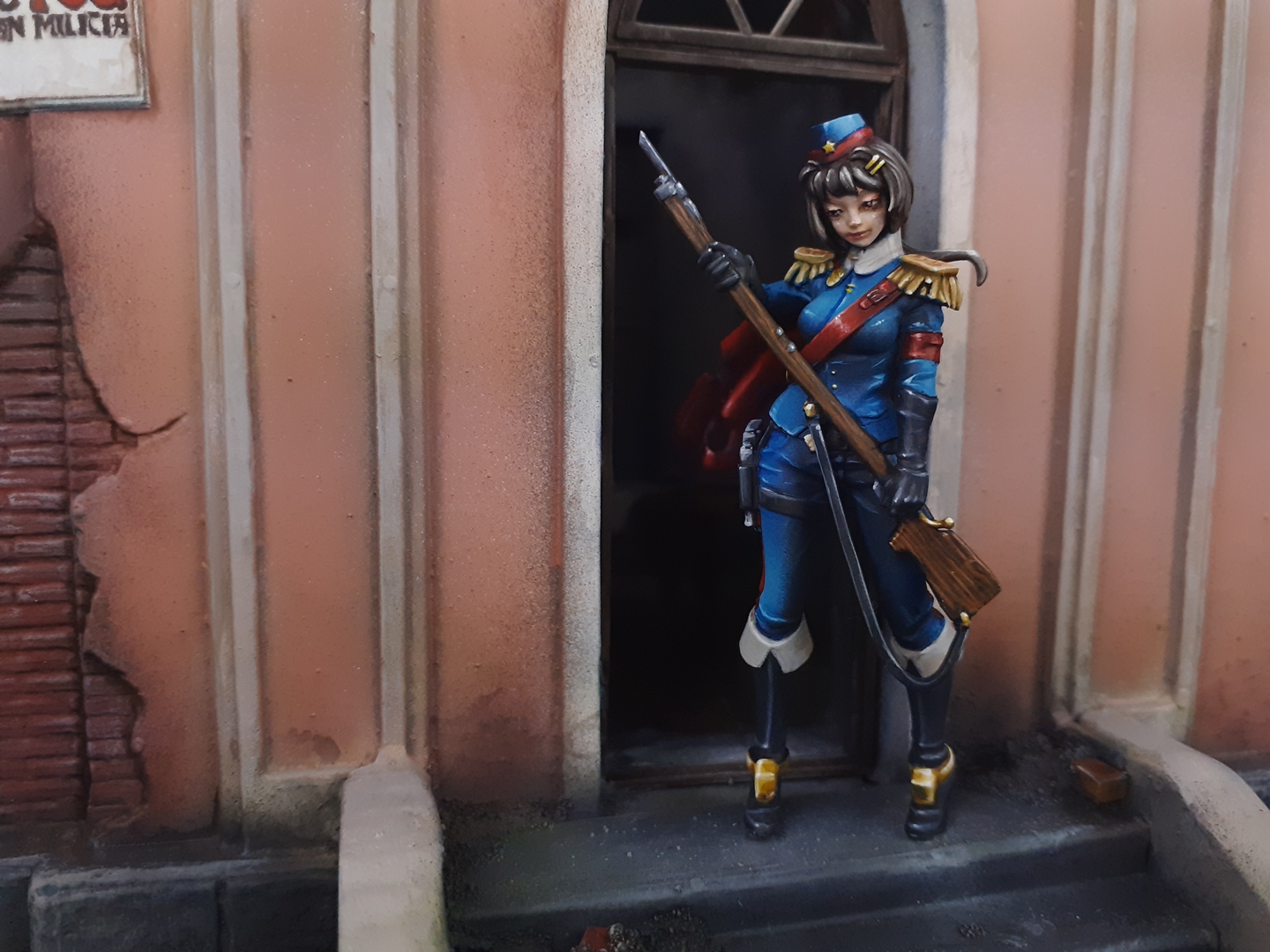 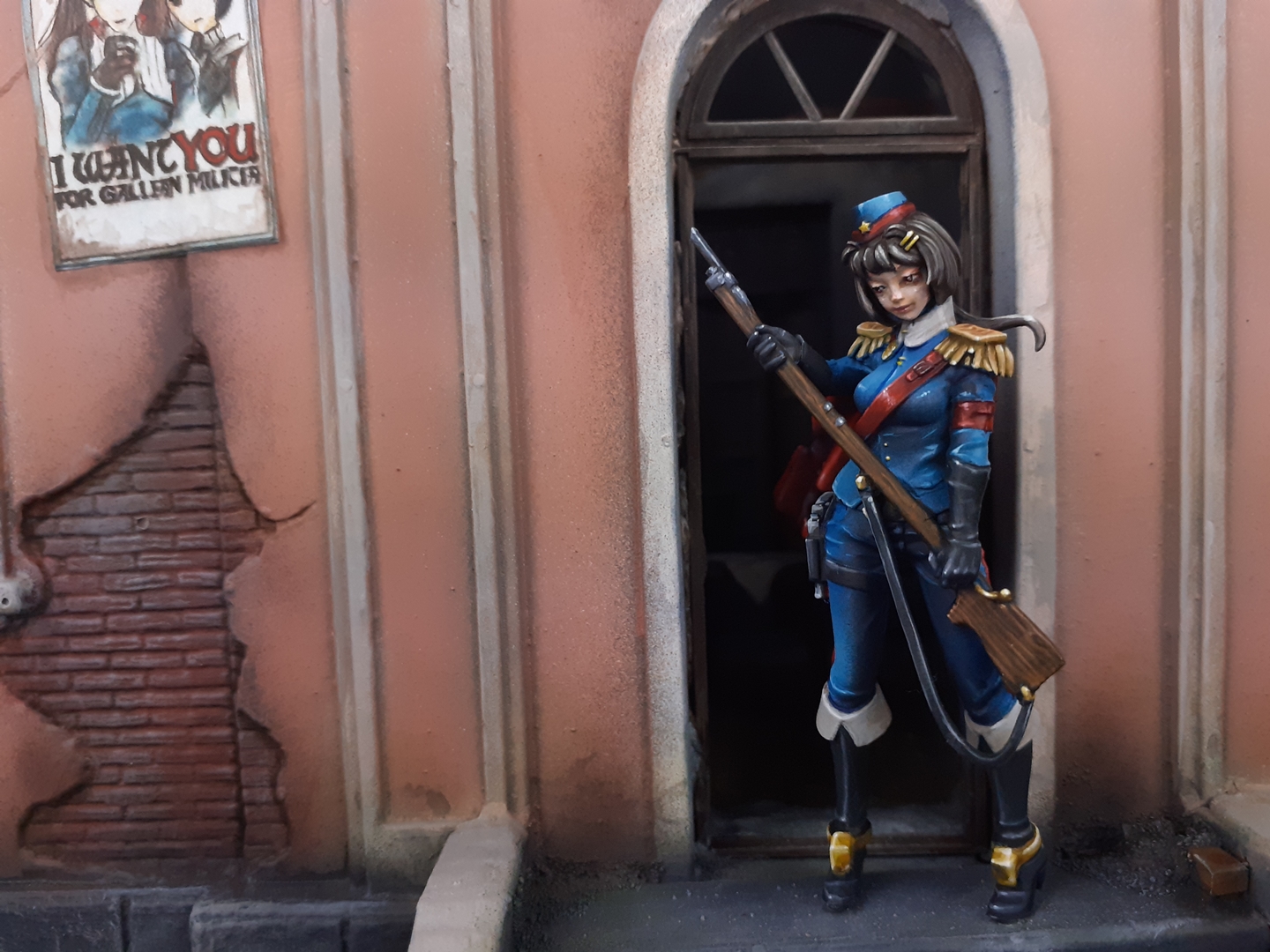 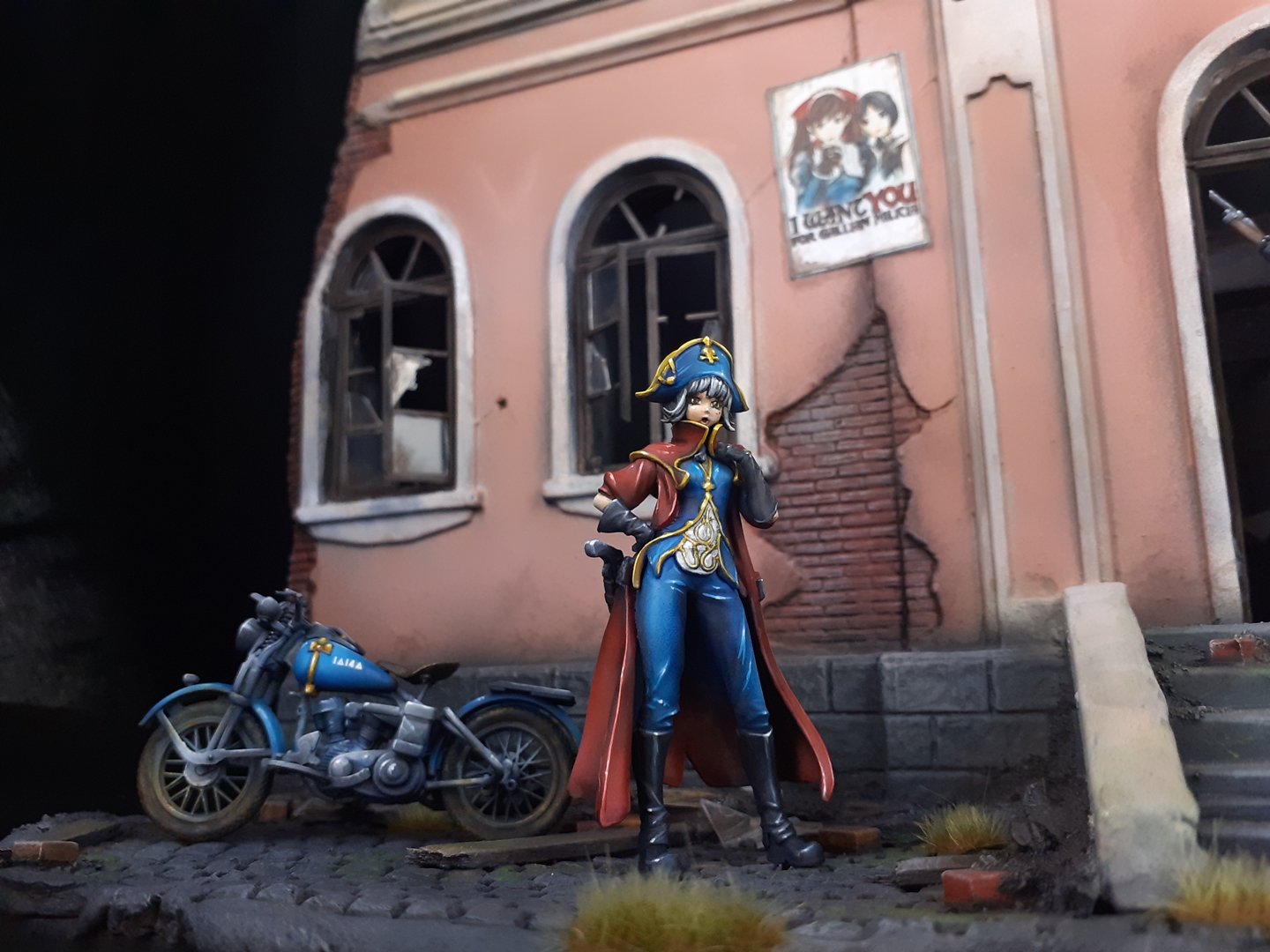 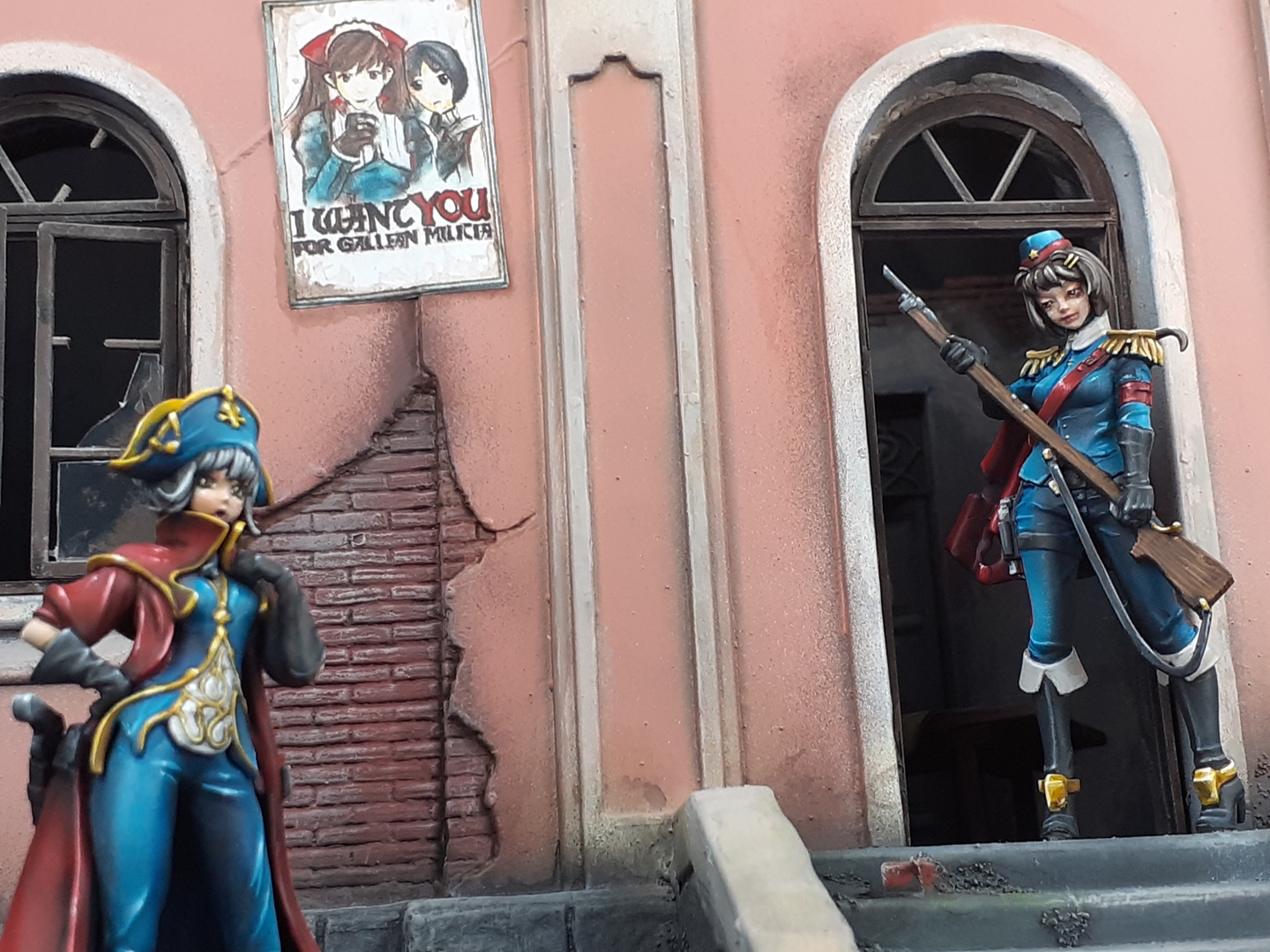 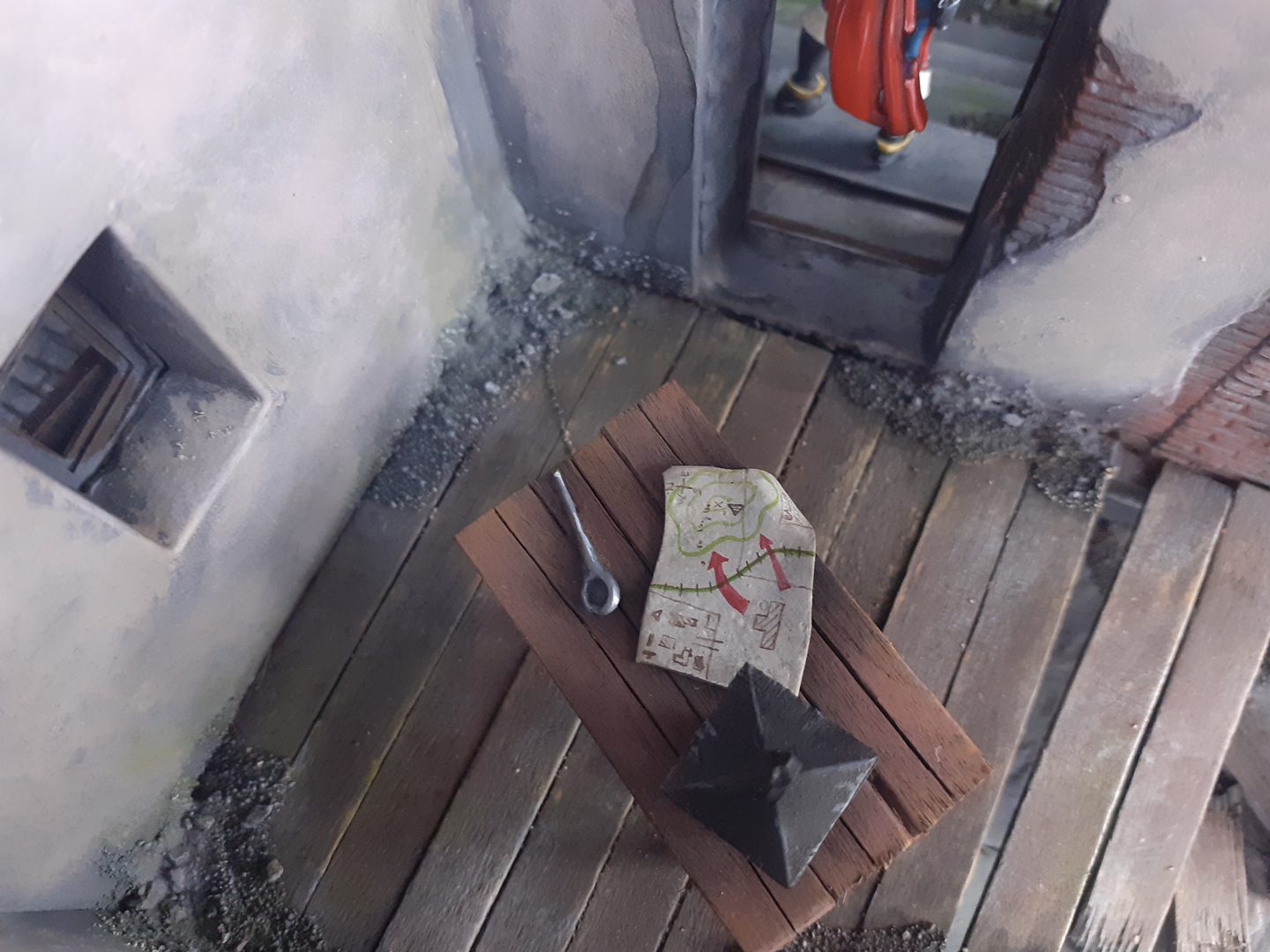 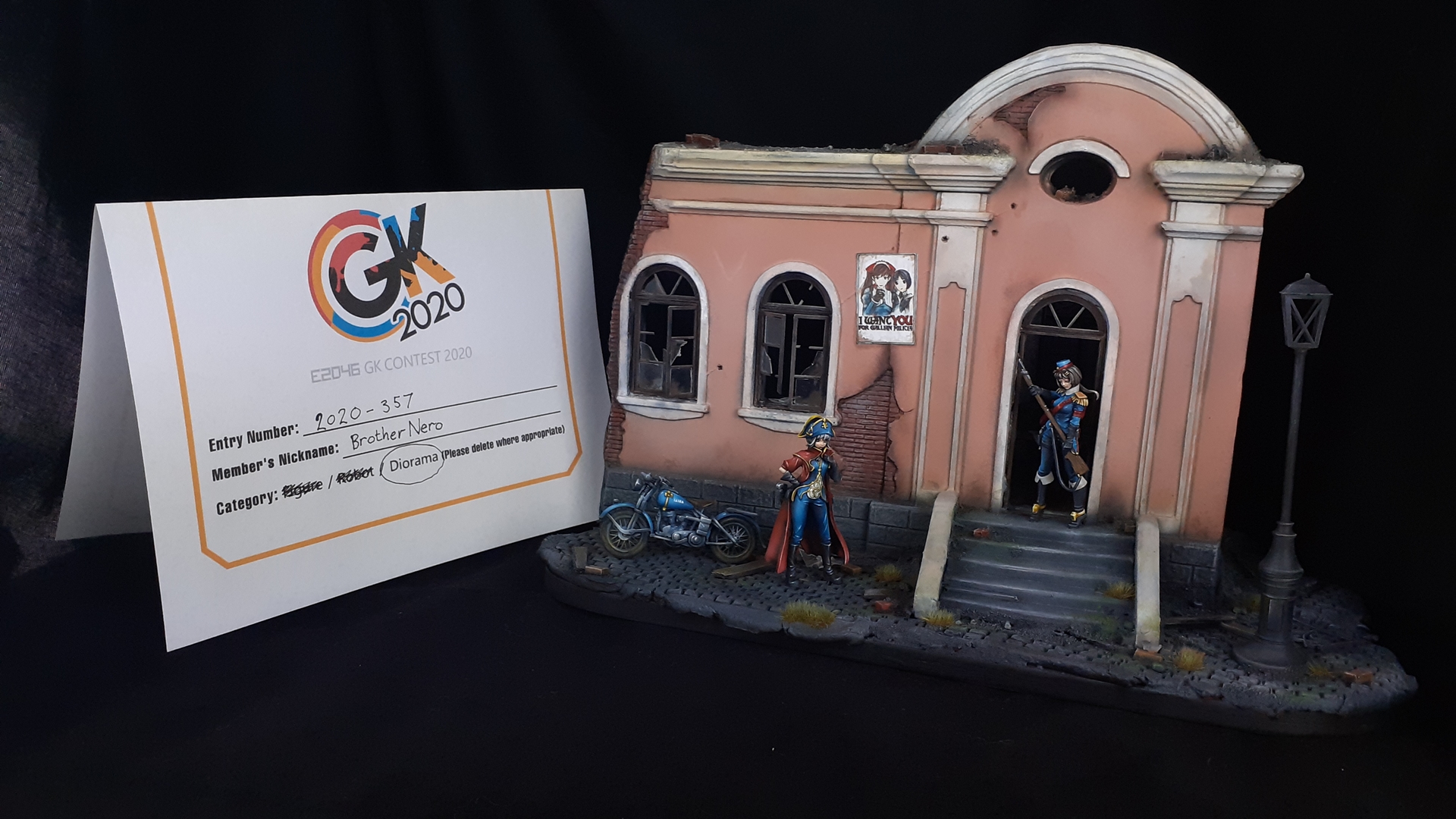 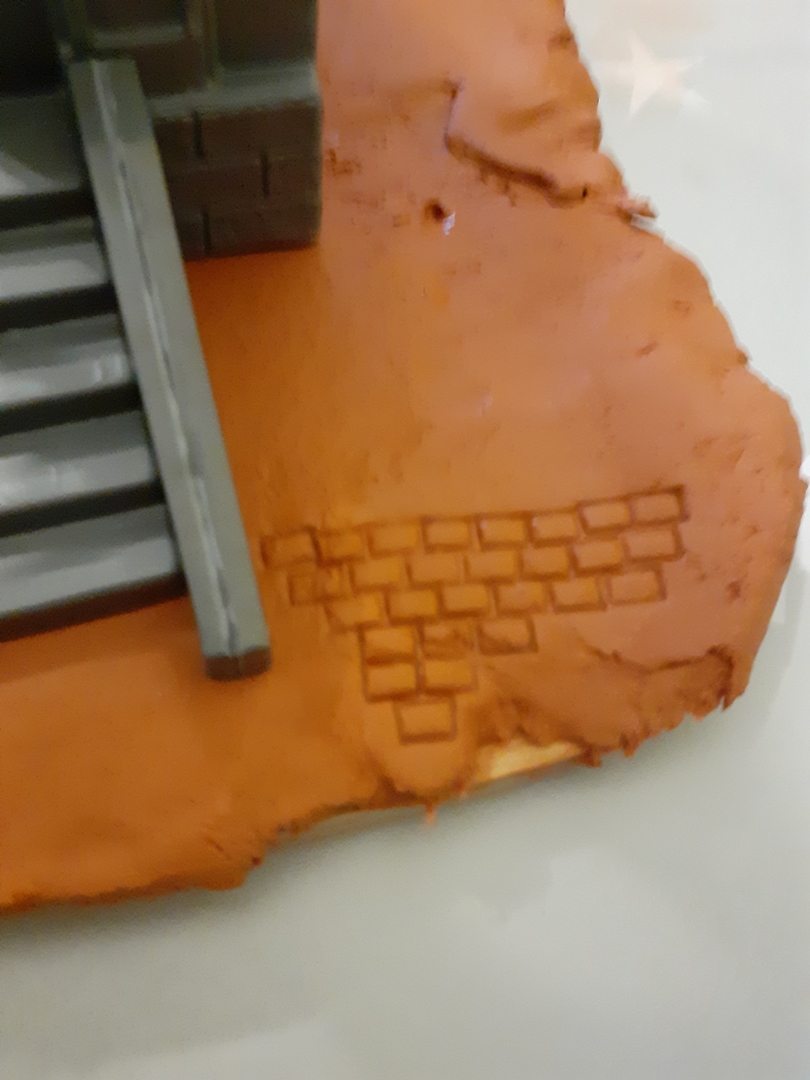 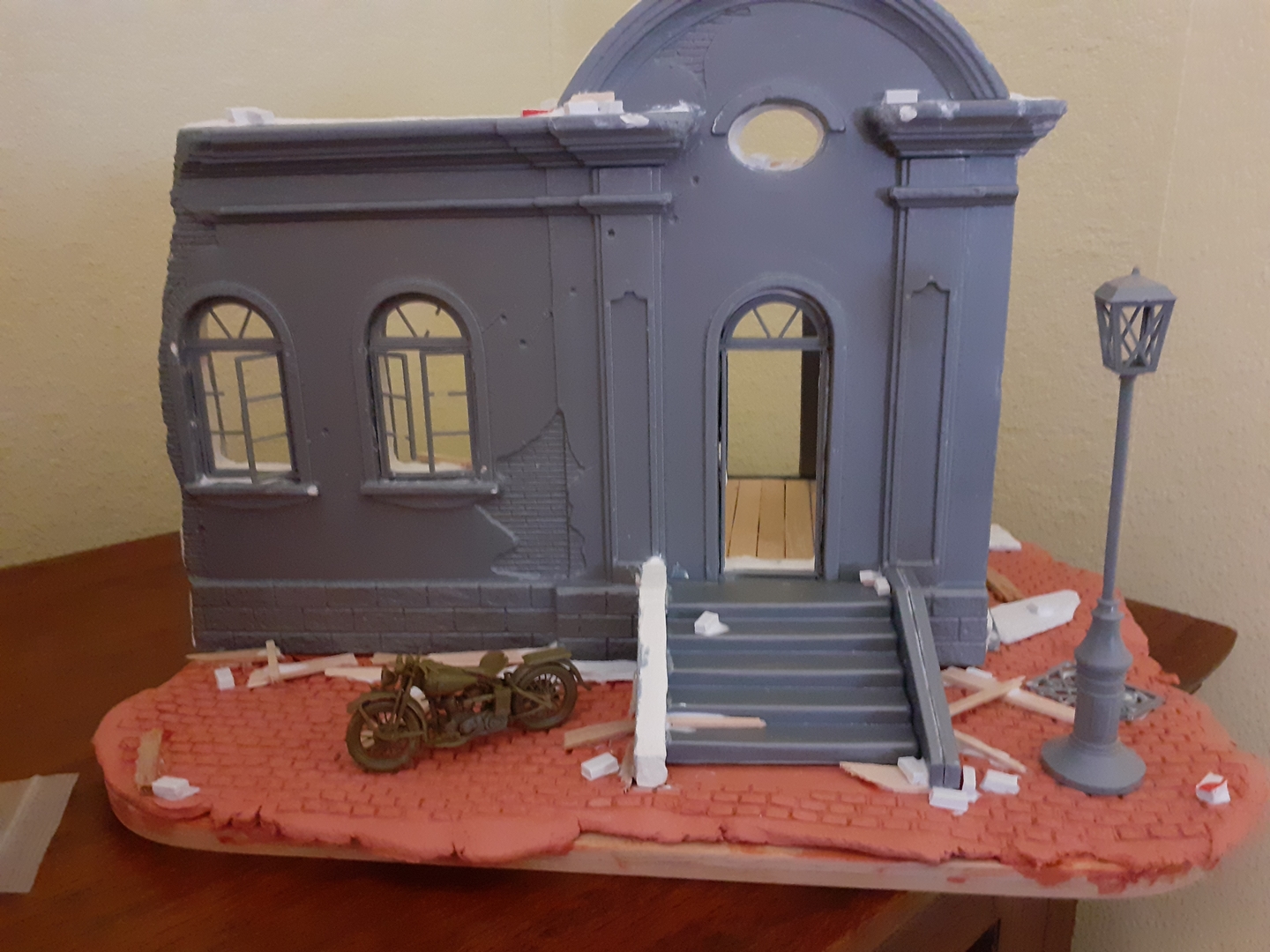 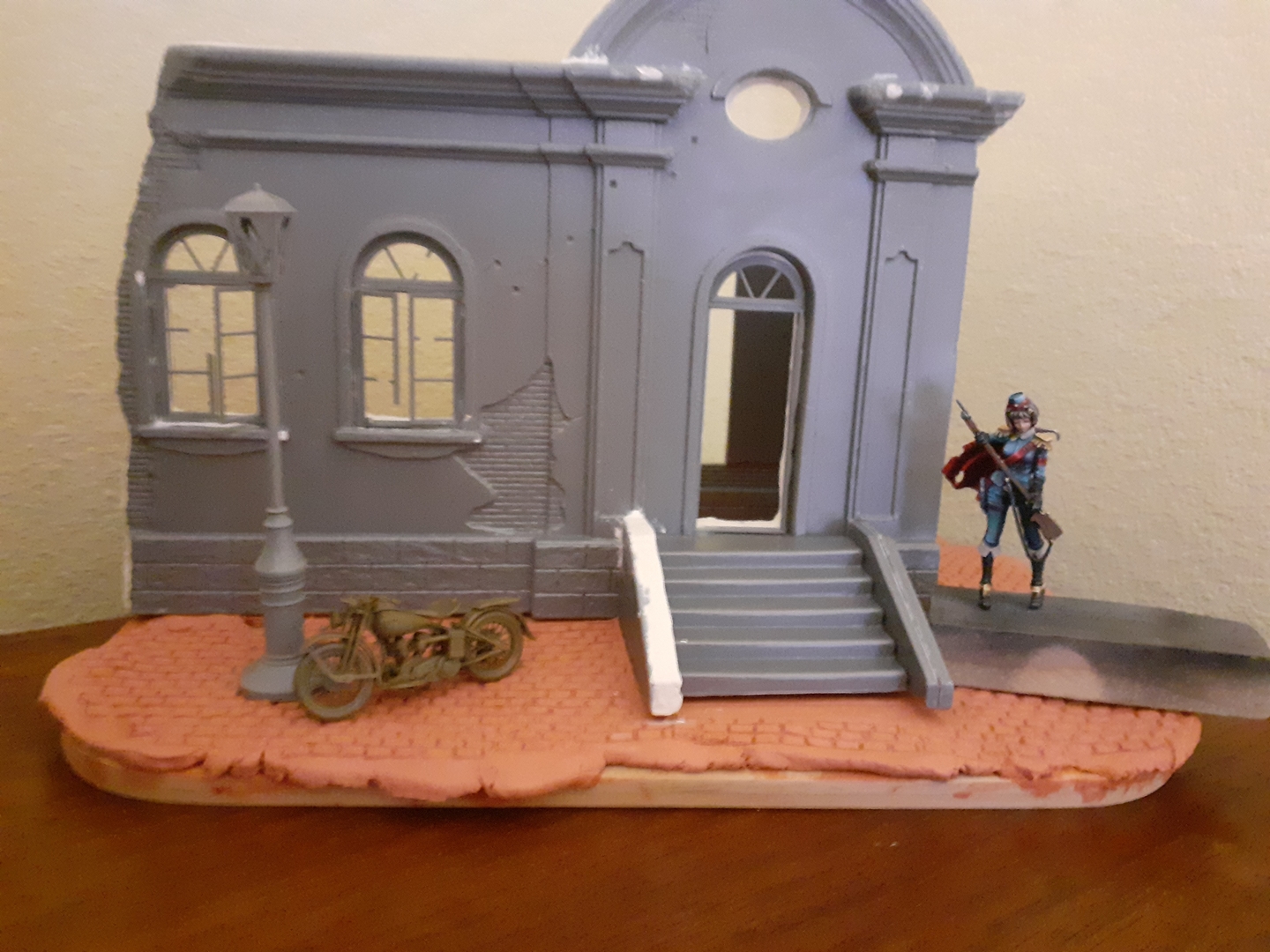 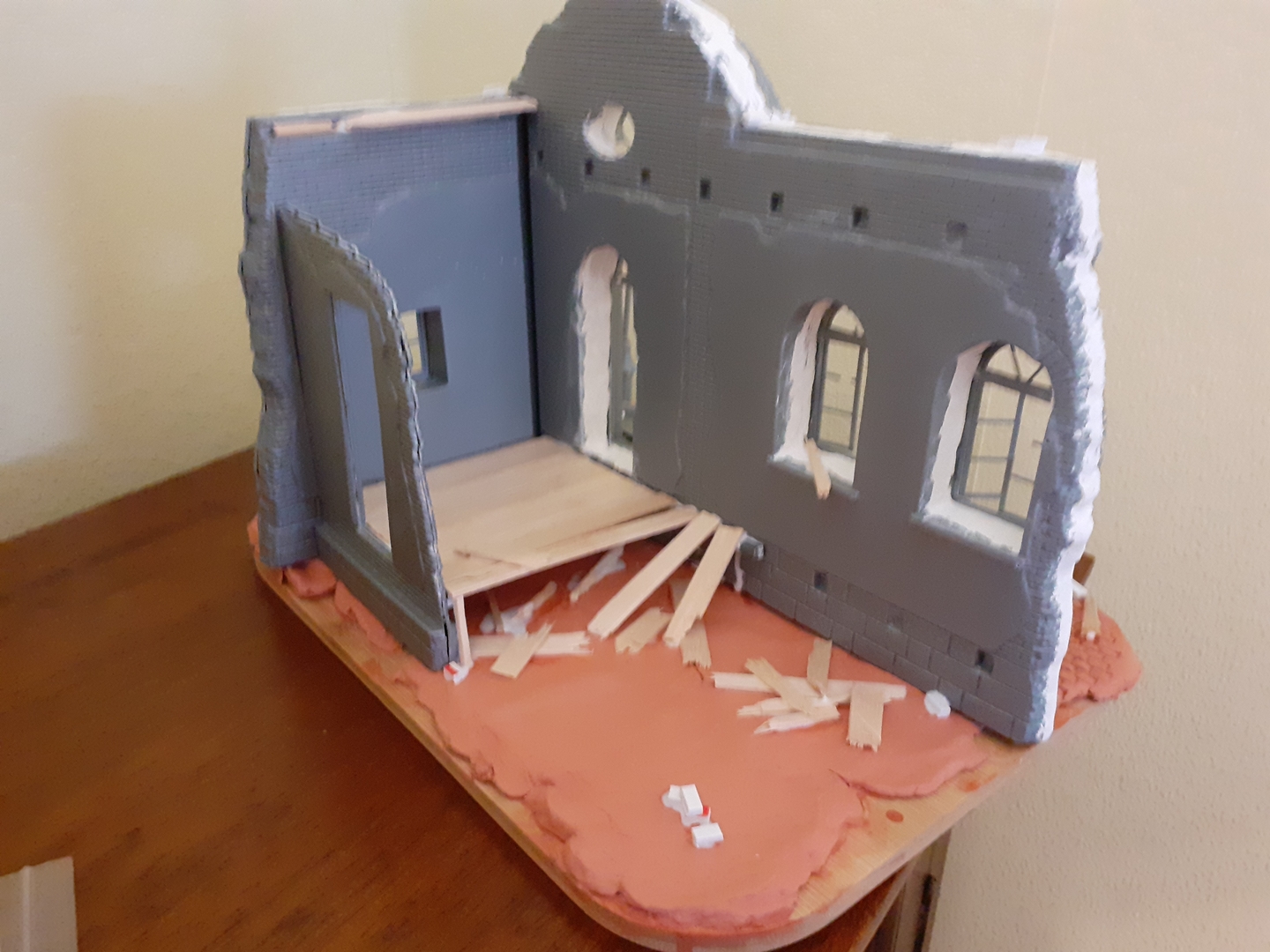 This is my first Diorama, so I hope people enjoy it. It was inspired by the game Valkyria Chronicles, which is basically an alternate history type story about World War 2 with a Japanese/anime flair. I started off just painting one model, and it grew quite organically from there. The models used are in 1/35 scale, and both ladies are resin figures produced by RN Estudio as part of their 54mm range. The scenery is part scratch built, but the building itself is mostly a kit by MiniArt. The bike is a kit by Italeri in 1/35 scale with a few modifications. I made the paving myself by stamping it out of air drying clay, and many of the details were added by hand; including the windows that I made from some clear plastic. I used a mix of Citadel and Vallejo paints. No metallic paints were used as I wanted to capture an animation style, so all metallic parts were painted in non-metallic metal style (using black, grey and white to create the look of metal). I used an airbrush for a lot of the base work, including blending and shading the figures' uniforms and to block in the colours on the scenery. In terms of the piece itself, I've tried to create the look of a forward command post in a ruined building somewhere in Gallia. I imagine the bike is used to bring messages to the front line and that the girl in the red coat is relaying a message to the commander. I've added little details to carry this theme through; like the battle map on the table inside the building and the recruitment posters. The posters were a bit of a pain as I had intended to just print them out, but I couldn't get good enough print quality, so most of the detail on them ended up being painted by hand. Thanks for looking!

Beautiful painting work on the figures and buildings! Love the look!! Good luck for the contest!

Wow! The whole building looks amazing! :O Great painting work too! I really love Valkyria Chronicle game so I smiled when I saw the posters too!

Good luck on the contest!

Thanks! I wasn't sure anyone here would even know Valkyria Chronicles!

The building is probably my favourite part - particularly the pink colour. It was a bit of a daring colour to go with, but I like the way it works to compliment their uniforms.

I am so happy you did the diorama!!! its really lovely. I was about to ask about the floor it looks amazing. the inside of the house is full of lovely details. i noticed the dirt in the walls. its a nice detail. the wooden floor, I believe its wood. painted wood.
I really like it. The tones you used are lovely. I hope I can compeat next year but I have been busy. I tought I would have some time last year but pregnancy with twins its really hard and I didnt want to harm them with the fumes. Now they are to small to leave them alone. The Coyonavirus thing makes it harder to get help.
Hopefuly I can do my plans for next year. Lovely work u know Im voting for u

Thanks Mary. Congratulations too! I'm sure the twins are keeping you quite busy!

it's been an odd year or two for me too - I missed last year's competition as I was studying for my master's degree which I only finished a month or so ago. Lockdown gave me more time to work on my diorama for this year though!

Thanks for noticing all those small details. I made a special tool to punch the bricks right into the clay, and it took about an hour just to cover that small area. Thanks for the vote too - it's hard to say how the competition might go, as I think part of it is just luck to be honest!

I hope you'll enter next year - I don't know if I'll do another diorama that soon though, but hopefully I'll be entering again.

I really hope we can both do something fir next year. I still have my ideas and I hope I can get them done!!! congratulations on your masters!!! Thry are reslly useful. I hope I can do domething also. For my work I mean.

Hey BrotherNero! This one is superb! It looks so realictic and detailed on such a small scale. Your paintjob is great! Also love the custom details. Thanks for the desctiption we can understand more about it. We work usualy in 1/6 - 1/8 scales. And when you build such a diorama in this scale it becomes way too big! ))) our last cyberpunk diorama is still in the workshop because its too big to leave the room)

That's pretty crazy - a few nore entries that size and you'll have no workspace at all! My diorama base is a wooden cutting board and is only about 12 inches across the front, so it fits in a cabinet easily enough. To me it still seems pretty big as I normally work in 28mm scale.

Thanks for the compliments!

Thanks. I like the 54mm scale - just big enough to get good detail without stress, but small enough that a diorama is actually possible without going mad! 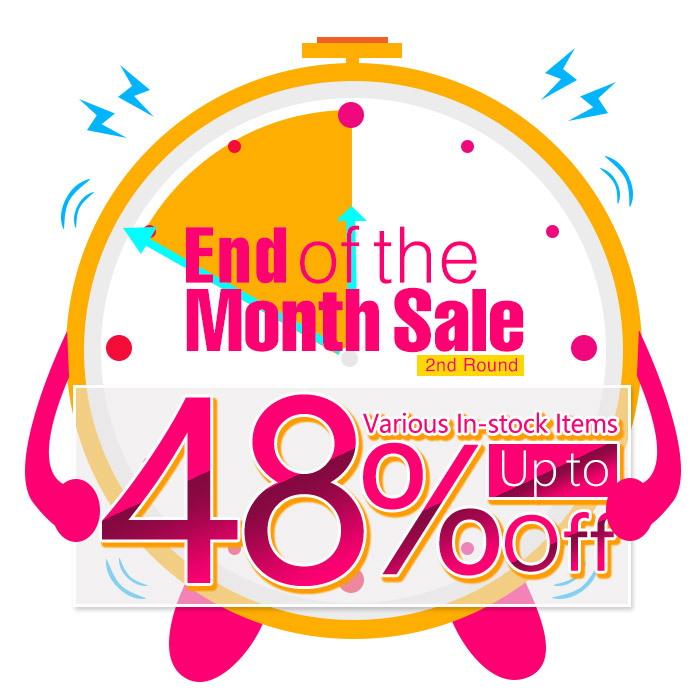