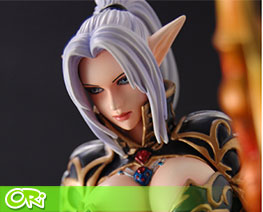 Hi! Just have got today the package from the post office (Yes, if you wait for the postman arrives your home in my country you can die waiting ) Very Happy All its ok, excellent casting parts and nothing broken Smile The sword blade in FG3449 its a little bit combed, but its usual and nothing that cannot fix some hot water. The packcaging in each one its really really good and strong for the long way that they had to do until my home, and delivery box for shipment looks really sturdy. Really I was very surprised and happy to find it Wink . Mention here too the fast delivery fron the Air mail, only took 4 days to send it (mmm......there must be around 11.000 kilometres). Well, I'm really satisfied with all and I hope to start soon to work in both of them. Greetings. Cool 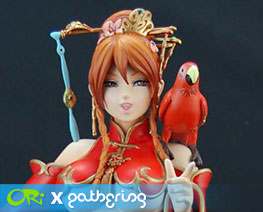 Wow! What an incredible original figure! The level of detail you give to your figures just keep increasing. All of the little details on her, her hairpins, her extra ‥doo dads‥ are sculpted with such care and precision. They are so lovely! Speaking of her hairpins, a small instruction guide for which slots they fit into would be very nice to have. As far as a critique goes, I would have liked the bells on her back to have been a separate piece, as the were nearly molested several times as I tried to assemble her. I really appreciate the stronger magnets on her, I was able to put on her front and back panels and not have to worry about them falling off as I assembled the rest of her. Unfortunately, her left arm suffers the same problem as my PF4019 1/6 Dark Magician (Pre-painted) where it like to fall off if I move her slightly. Which makes her parrot buddy fall too. He was also difficult to put on until I found his ‥sweet spot‥ The only thing about her that really bugged me is her fan, it isn′t set into her hand, rather it is glued into her sleeve. This looks ok when viewed at an angle, but when looked at from the front, it is very obvious that it isnt in her hand. 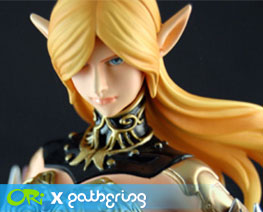 I'm so happy with her, just got her in the mail today. She was very well packed, so nothing was broken. ^_^ I'm absolutely blown away with the amount of detail the she has. Her arms fit together snuggly so I didn't need to glue them. Though the one arm with the bow might be better off glued, however I'm going to avoid that if possible. And the swappable armor for the skit is just cool. I can't wait for the Elf Princess to be available for pre-order, I've been clicking the pre-order button for her non-stop... (http://forum.e2046.com/viewtopic.php?t=17703&start=520) I just can't wait to see what is next to come for Ori in the darkness series![/url] ::edit:: Almost forgot to mention that I got the Space Cruiser model kit that I won in Decembers Lucky Draw contest, many thanks.

What to say.. She is beautifull ! Qiao Yin is not my fist pre-painted figure, but this one is surely one of the best. The paint job is perfect, with a lot of details, and at the end, with all the pieces, she was very cute. The packaging as usual is very good too. I'm very happy and thanks to e2046 for this excellent kit. Joe 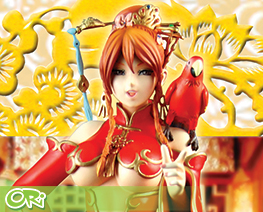 Qiao Yin is my second kit ordered from E2046 and again I'm very pleased. The kit from what I could tell is nearly flawless with no immediate signs of casting defects. A stunning figure, even looking great without any paint. The shipping was fast, the packaging was great. (bubble wrap woot woot) I definitely look forward to ordering more from E2046.

I am very happy today! Got it from post office, very well packed, bubble wrap outside the box protected very well, and the foam thing inside really secured all the parts so nothing broken Very Happy BTW, this is my first direct order from E2046 (My first E2046 item PF3937 1/6 Shion (Pre-painted) was bought from other seller). Anyways, as usual every part very detailed, excellent paint job & actually to me it looks like 99% as the one on the site. I will not assemble her for now cause I don't have any clean covered area to display (cause I don't want the dust to ruin it after a week or so) And after inspection I need to be very careful for placing her back in the package cause the two bells hang out from her backside could be easy to break (so no pressure on them at all). I have 100% confidence on any E2046 items, and 4 sure I will order the next one soon. Which means I need to keep saving money for them from now on I suppose. Very Happy So E2046 keep up the good work & I will be one of your loyal customer!! Thanks for the excellent quality!! Razz

Another solid elf sculpt, this time with removable and interchangeable parts! The magnetized feature for attaching the costume parts if very innovative! Very innovative! Highly detailed and flawless paintwork too! I say keep the elves coming!

Wow! What can i say except i'm thoroughly impressed with the 4th strike from ORI. Very Happy The sculpt of the figure is incredibly detailed and so is the painting. Just looking at the intricate designs on the chestplate already tells me how much time and effort was spent making it perfect. The number of removable parts are just mindboggling and everything fits perfectly without being too tight and risk scratching off the flawless paintwork. The idea of providing the interchangeable skirt armour is just brilliant, and addition of a quiver of arrows further strengthens the picture of an Elf Ranger, which really adds value to the whole piece of work. This has got to be my most favourite Gathering kit to date. Keep up the good work guys!

just back from the 2 month holiday got so many gathering kit from e2046 Qian Yin is a very sexy kit, and a very mature ORI product. I bought more than 10 gathering from e2046 now. and i can see you guys put so much effort of trying to improve the quality of the painting and packaging. I must say the packaging is excellent, nothing is damaged. and the paint quality is improved again. I cannot find any poor painting part, everything is smooth and well done. the gold hand paint also smooth and no bleeding, cannot see any stroke mark. much better than the previous product. I give this kit 10/10 keep it up! looking forward to see your next kit.

Delay between shipment and receipt simply because I was on vacation Smile. My second ORI purchase, and again I'm impressed, although not *quite* as much as with the Magician. Fit and finish is perfect, with only a few tabs to remove, although I personally think some are in odd places -- my parrot has a mohawk Smile. My complaint is that the main leg piece/lower torso has some chipping around the trim on her back. Now, it's nothing that I won't be able to fix on my own -- I've fixed worse self-induced chips --, but the weird bit is that it was inside a sealed bag, but I only found ONE of the chips inside the bag. I'll post a photo later to show the damage. Anyway, thanks!

Hi Isaac. I have received on this day FG4019 Dark Magician 1/6. I realized that this is the first Original kit I have ever owned! Maybe I should just have left it in the box! But I examined it for purchase feedback so here goes. Everything arrived safely. That really was overkill on package insulation! One great big 4 gallon plastic container(also containg a different order.), a smaller plastic box surrounded by several layers of bubble rap with another box inside braced by foam, inside of which ware carefully packaged model parts surrounded by more bubble wrap. The dark Magician looks very good. No broken parts (obviously) and novisible surface flaws (air bubbles scratches etc.). There are some small seamlines present but nothing unordinary. many thanks mike

Hello all together! Like the "Peorth and Gorgeous Rose" Kit this one too arrives right before christmas! I'm really impressed how well all the Parts are made. When everything is painted and build I will at some pictures to the gallery to show all of you the results. Wish you all a happy beginning of 2008! Ciao Dreamers PS: Maybe I really have to place another order to get all the Kits from the "Dark" Series? The design is more than great!

I'm very very pleased with Ori series, Qiao Yin came fast and well packed and nothing was broken Exclamation It was a little complicated to assemble her hair decoration, but with pictures online and at the nice box it works. Thank you so much Bow Best Regards and a Happy New Year

Amazing!!! I found it is one of your best figure. She has so many nice details that I don't know how to start. The face, the colors and also the dragon on her legs. She arives me in very good conditions, so she was well packed. This is another wonderful piece for my collection. Thanks.