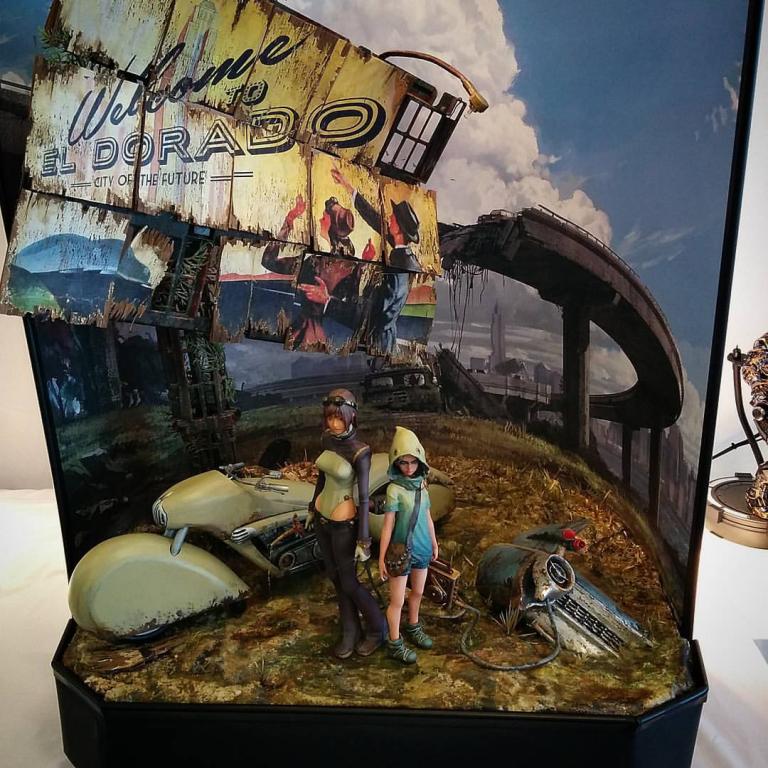 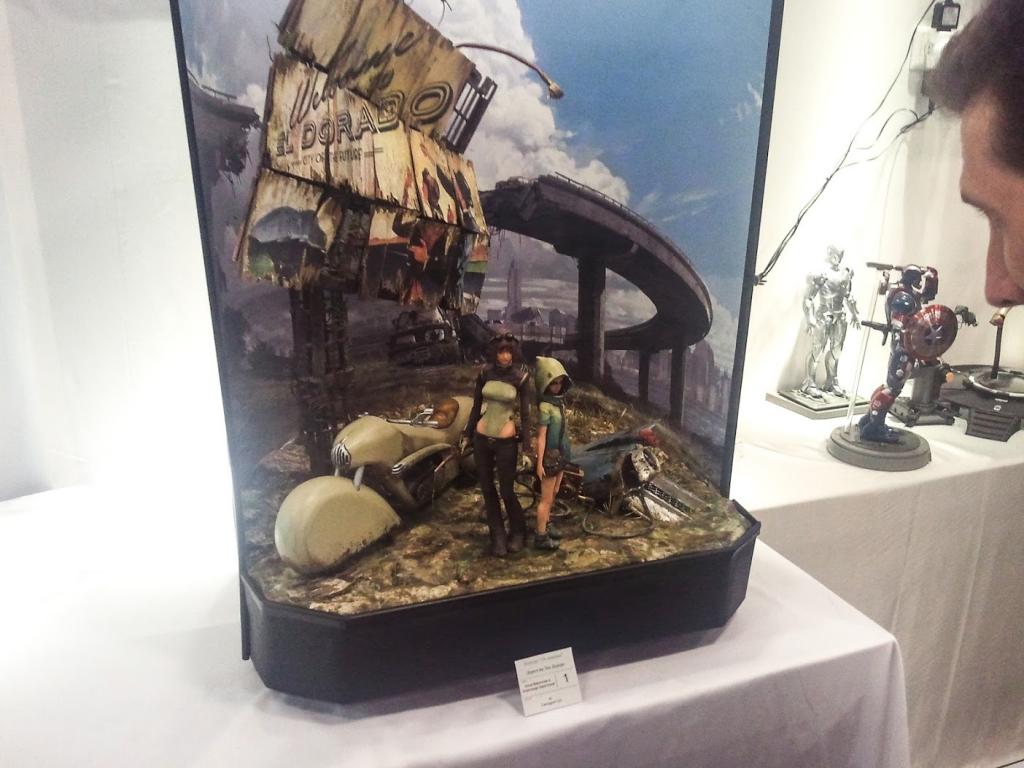 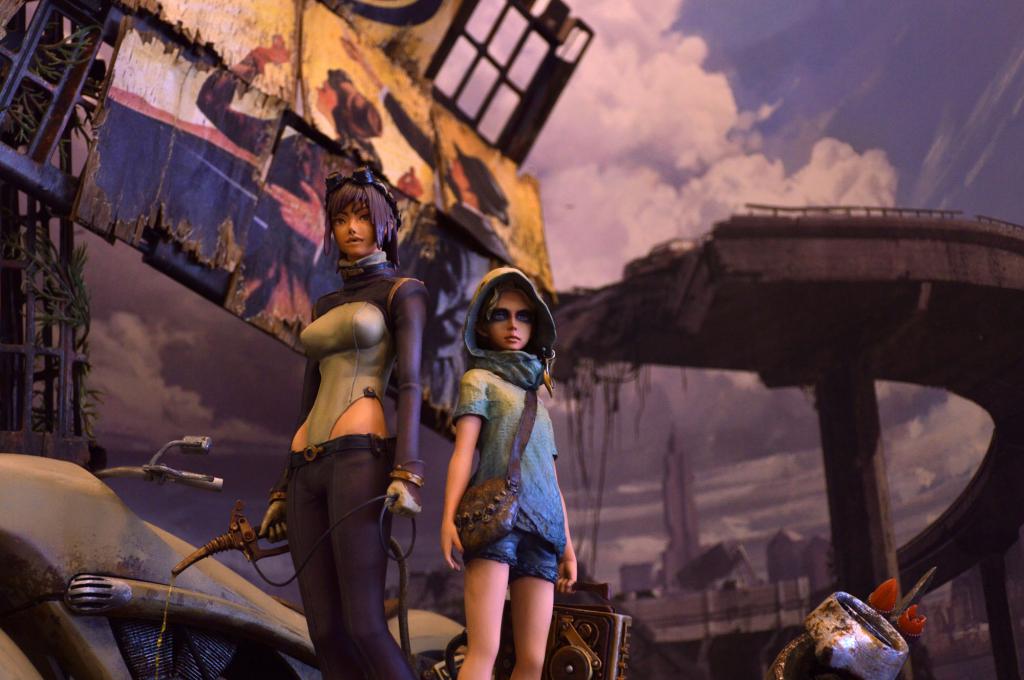 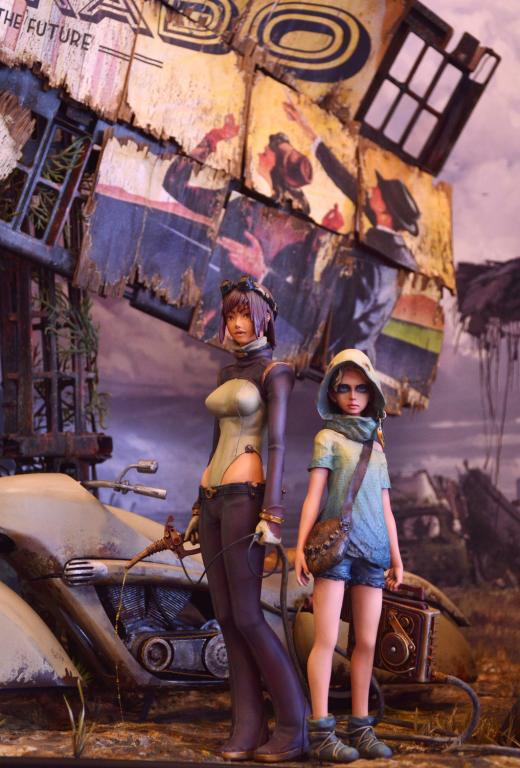 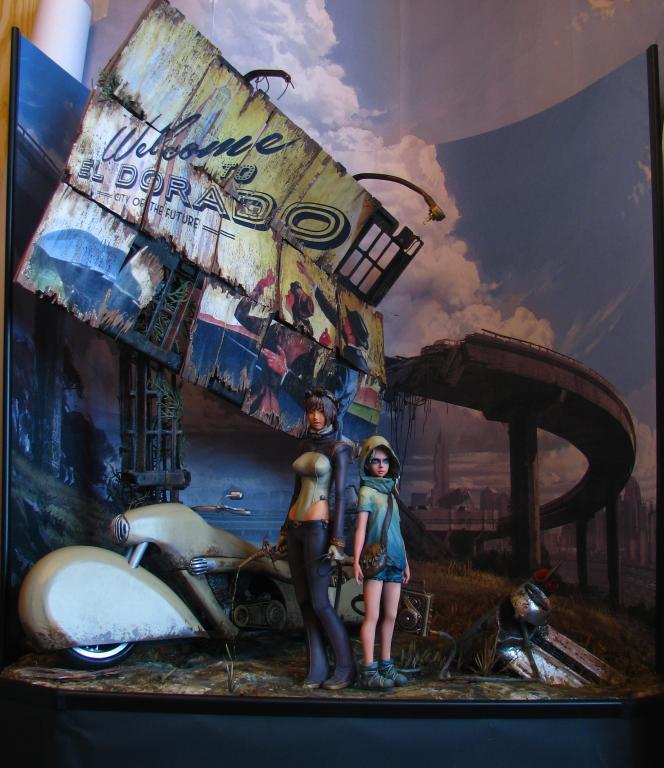 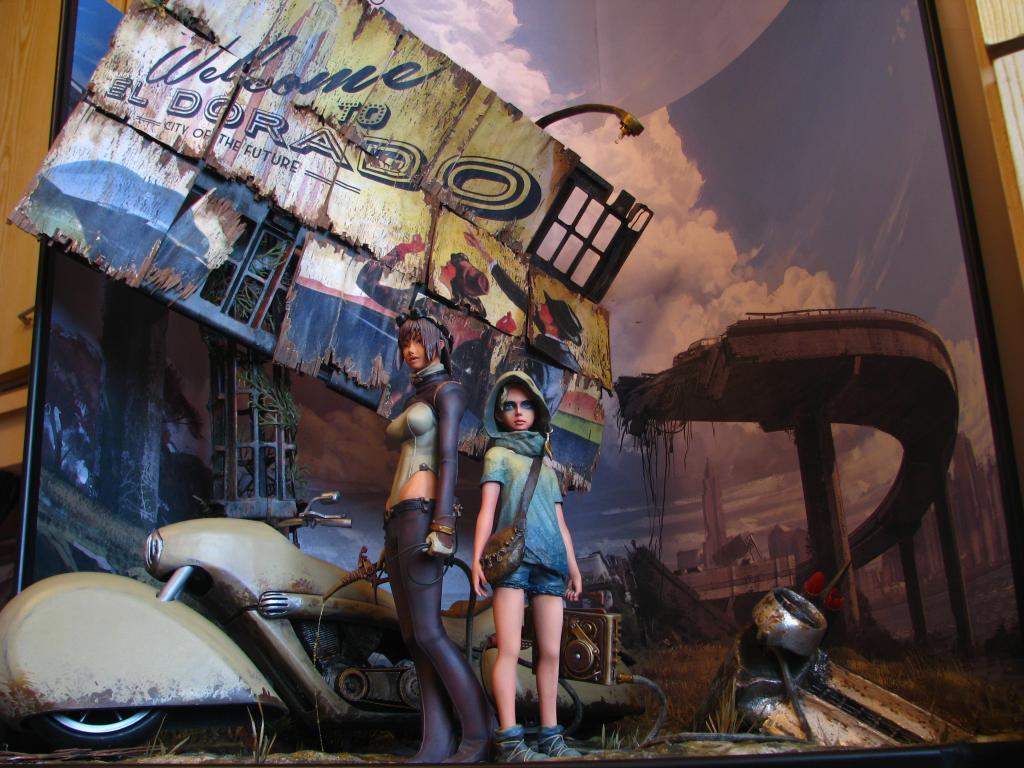 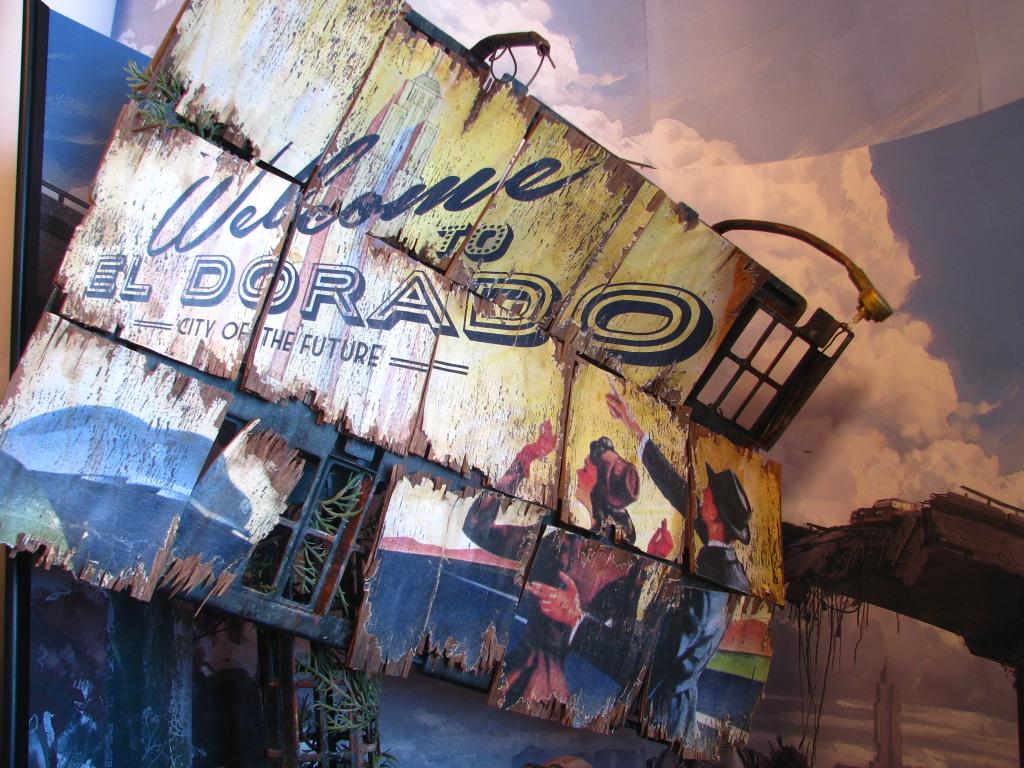 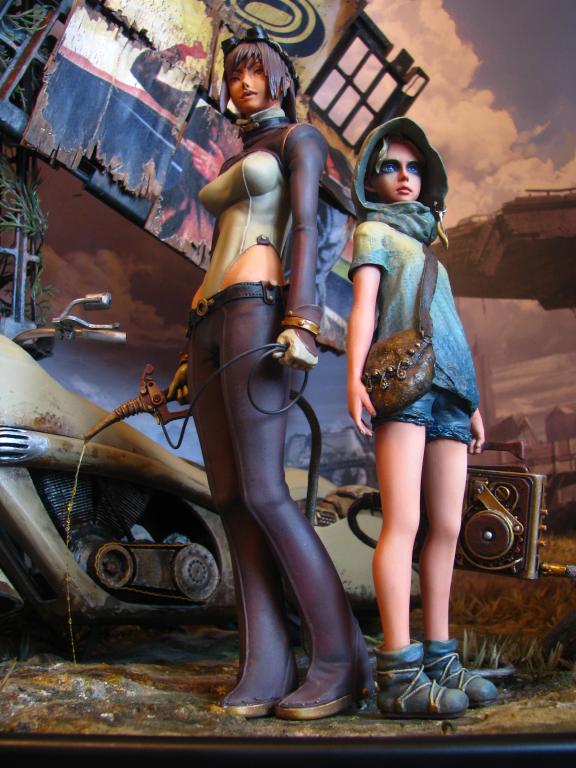 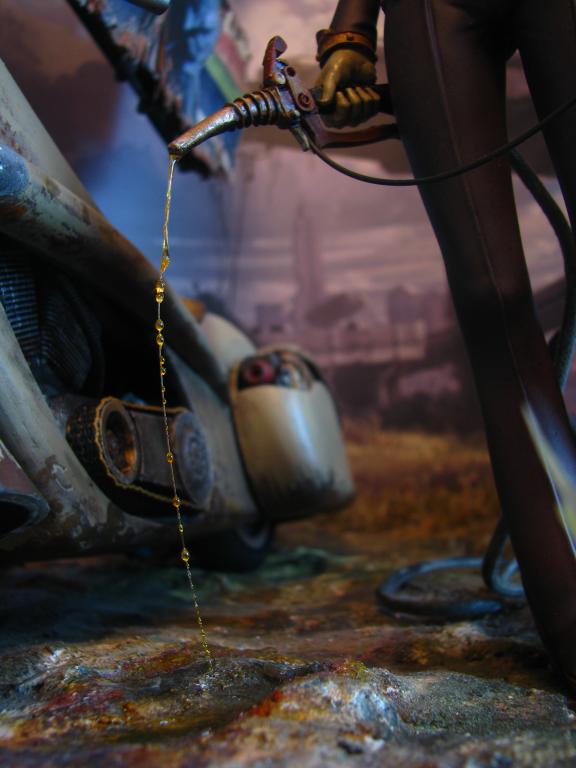 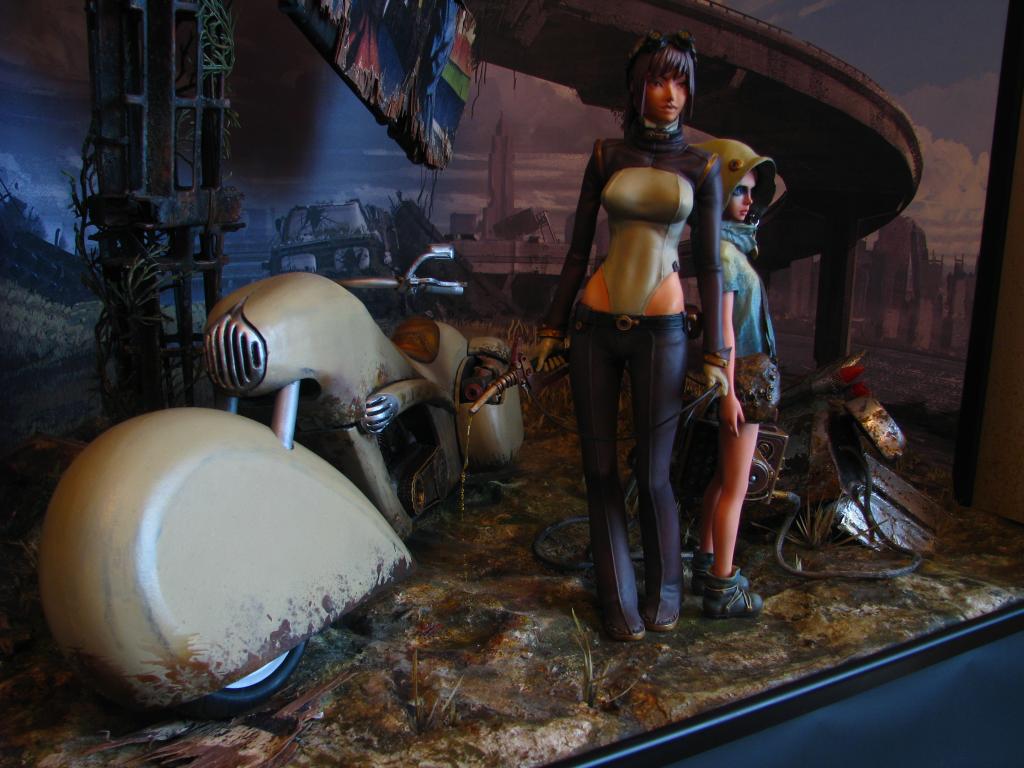 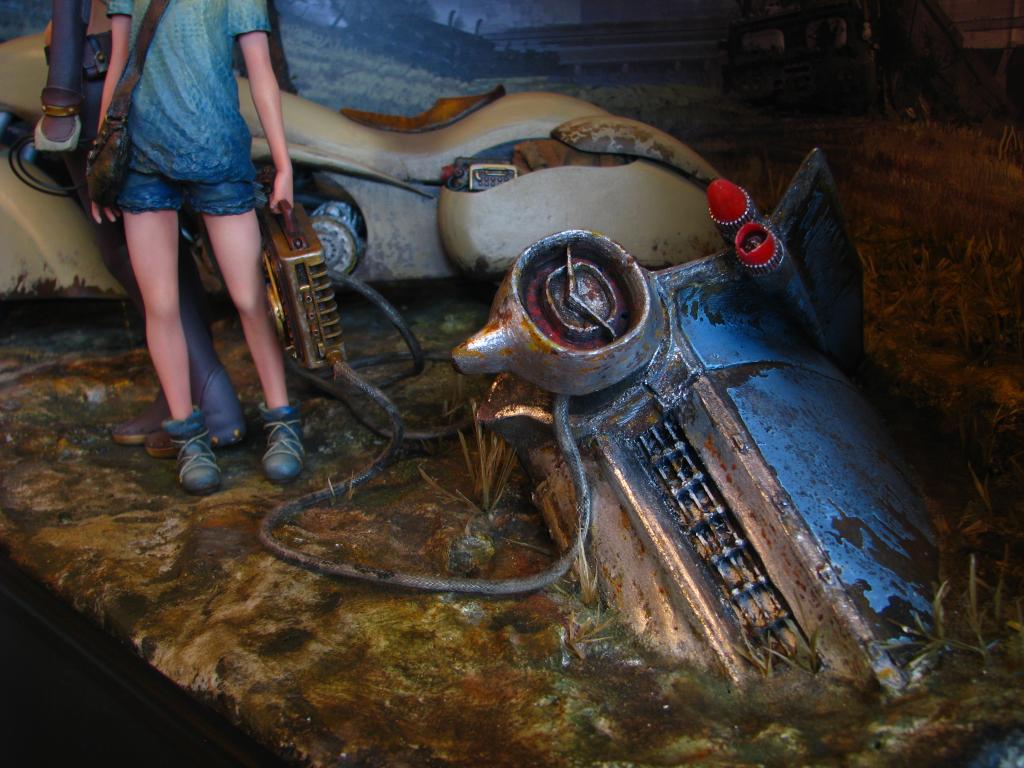 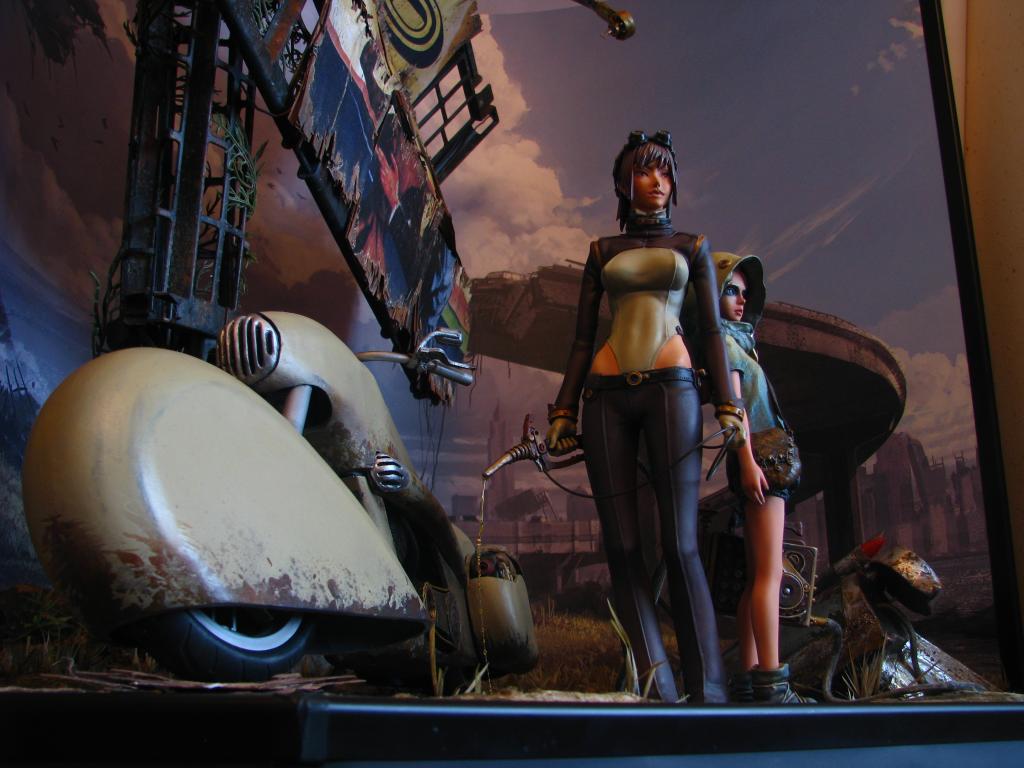 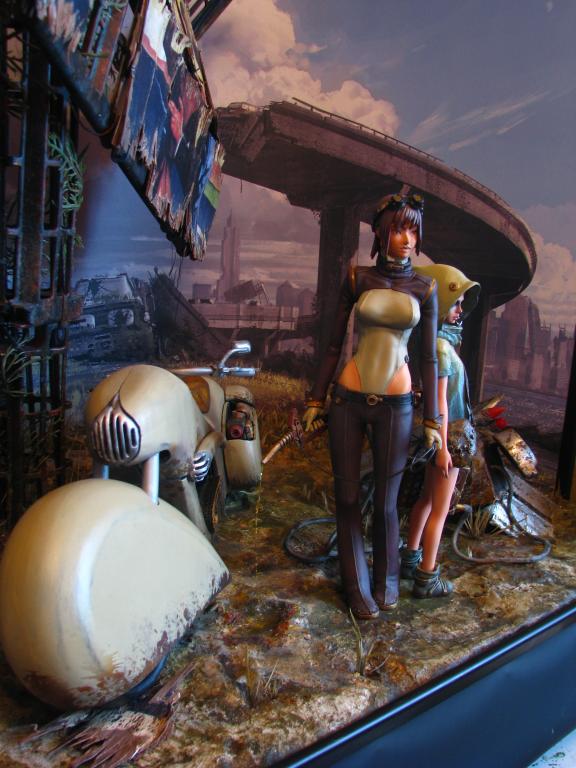 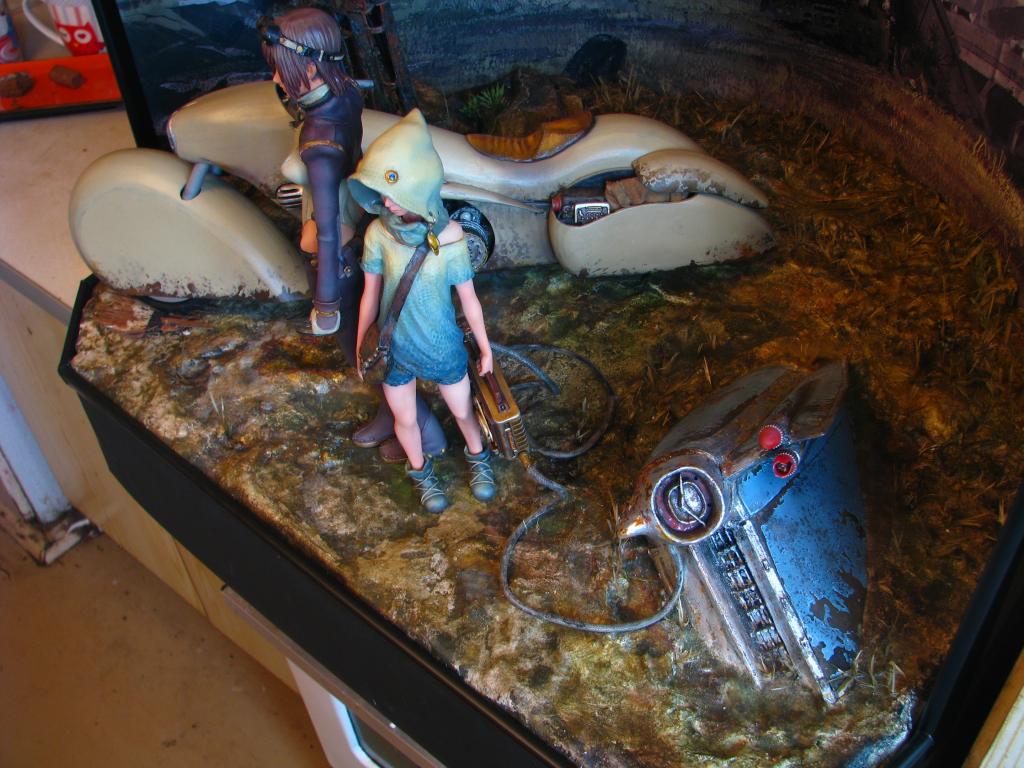 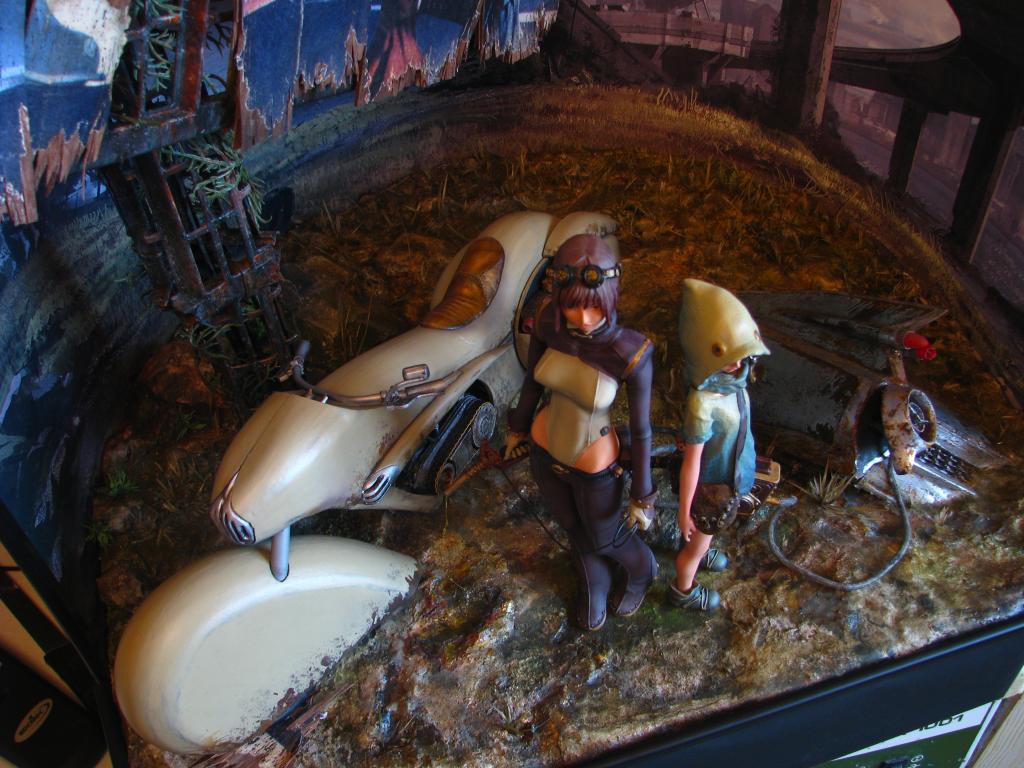 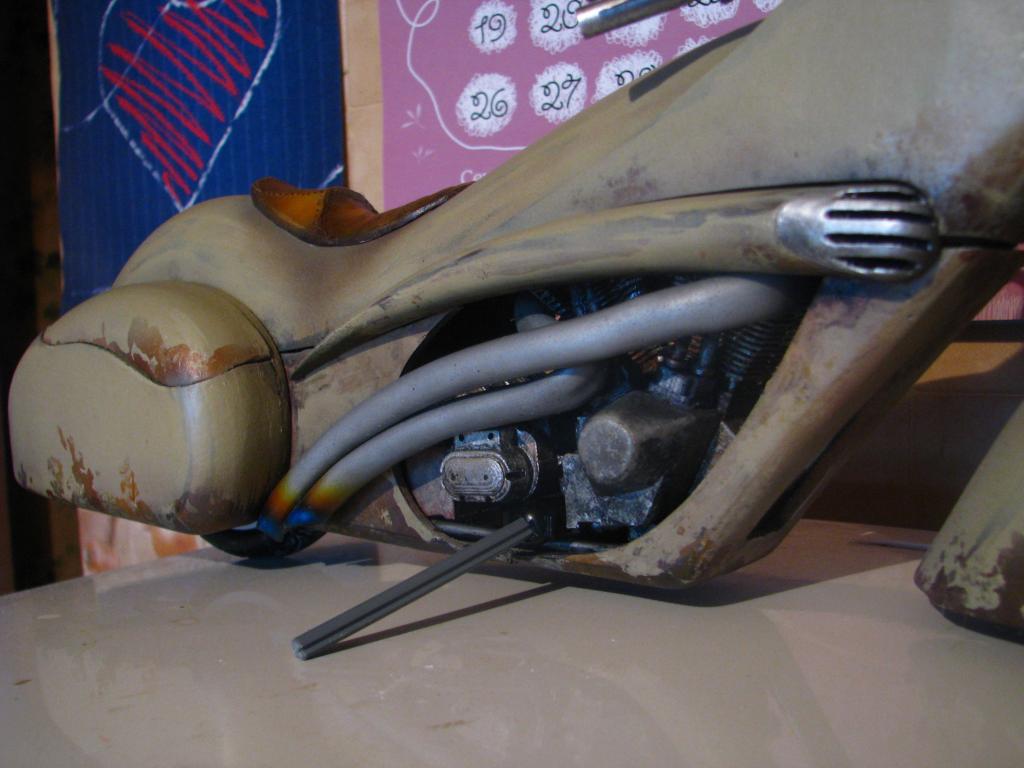 Hi everyone!
Here is our first stand-alone diorama "Road to El Dorado" made specially for small diorama contest in Moscow. This time it's postapocalyptic-dieselpunk style.

The story is about of two girls El and Dorado (El - is a name of original character given by sculptor. And when we decided to combine with another figure we realized that second girl needs a name too. So we decided to do some word-play and continued "El" with "Dorado" - so the pair name is El Dorado - "Golden city"). They are heading to abandoned city "El Dorado". They stopped near a highway to fill the chopper's tank, taking bad gasoline from a crashed car.
1. Figures have many modifications. We made a hood and a bag to Dorado and transformed strange El's stick to a fuel-gun. Also moved the box to Dorado.
2. The chopper is my first complex 3D-model in Solidworks.
3. Sticking back of Cadillac ElDorado'59 is also printed, painted and weathered. Real car didn't have the fuel door in this place but it was the real trend in 50's to hide gas cap behind one of rear lights (Many american 50's cars have this feature)
4. Billboard made of a plastic box. Poster is made of a few scans of 30-50's advertising and magazines, then title was added, printed and glued on a natural veneer sheet squares.
5. Back is a modified concept to the "Last of Us" game, (I redraw vehicles and added a skyscraper from the poster to a city skyline. Printed it on PVC.
6. It's the first time we tried transparent epoxy resin to imitate liquid fuel.
7. Dorado have a lot of fish-style elements. Her fish-head hood, paint and even a small fish hook as a details because "dorado" is the name of a real yellow-blue fish. Also regarding our story she is a shaman from one of coastal wasteland tribes.
8. Computer in a motorcycle back box is a piece of a "kinder-surprise" toy.
9. Lamps on the billboard made from a broken lamp stand.

Glad you like it! This year I hope there will be another great project on Big Shelf 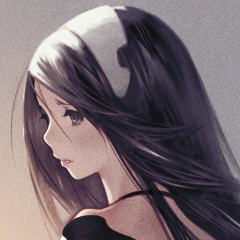 Very Very Very wonderful work! it's something over a masterpiece! I'm gonna take it as the picture for "Gallery" on the menu, as well as a feature in Facebook and Instagram. Thank you very much for pay so much effort and spending so much time on it. I wish to see your work for GK Contest 2016. Bravo!

WOW! Thank you, Jacky! It's an honor for us to be chosen for gallery menu picture! We are so happy you like our diorama so much! We tried our best making it. And I want to assure you - you won't be disappointed in our GK-contest 2016 entry ))) There is something special is coming. ^_______^
Also we plan to post WIP gallery of El Dorado very soon. It's 90% finished and i want to finish it today.

Thank you very much for your sharing as well as the WIP. I've prepared to post in on our facebook group tonight. and look forward to seeing your works in GK Contest 2016! :D

This is so amazing! I absolutely love everything about it! The detail is superb <3

Thank you so much! We are really happy you like our work!

Perfection everywhere you look at !
Very well done and congratulation for your first place.
This diorama is state of the art !

Can't wait for your WIP.
Cheers.

Thank you for such a valuable comment, Olivier! We always try making our best mo matter how big a competition is.
WIP is coming. We're planning to post it in a few weeks.

I love the whole design of the diorama.

It also reminds me of a movie called The Road.

crio22, thanx a lot! You are the first one who remembered "The Road". Mostly it reminds people about Fallout games and post-apocalyptic version of "Michiko and Hatchin" anime ^____________^

Really jaw dropping! Perfect Diorama. It really tells a story that makes me want to know more about the characters.

Thanks, moetle!!! I'm glad you like the characters. We love them so much that I even started to write a short novel about their trip. Sadly It will be only in russian I think (my english skills are not bad, but not good enough to write novels in english). But I think I can translate a piece of it and publish with the WIP.

Congrats on your winning effort. Concept, craft and presentation ....WELL DONE! You have produced a real masterpiece.=D>

Thank you, sparkvark1, for such a valuable comment!!! We always try to make 100% of what we can do. There will be a WIP gallery soon. I hope you'll like to look at the processes of creation too.

I simply LOVE your work!!!!

Very nice job. A design is breathtaking, I looked forward to the details of the design (which you mention above).
A big thank you for sharing

Thank you for your comment, Sonia! WIP is already in the progress. I think it will be even more interesting than completed work as usual )

First of all, Congratulations on the win. This is a phenomenal work of art, and your skills and talent are shown to perfection. The girls are beautifully painted and modified and the setting is flawless. There's so much to see, yet nothing overwhelms.
An impressive diorama that inspires as it informs. Well done.

Thank you, Zephyr, for such a valuable comment! Wait for WIP - there will be many interesting info about our researches, techniques and technologies we used to create this project )

To bad you did not save this one for the contest, it would have been a winner. Good work, thanks for sharing.

It was made for a contest (very small real-life contest in Moscow) and it won the first place. So it's was impossible to use it for the contest here. But don't worry - there is another awesome project for E2046 GK-2016 )))
Glad you like it )

I believe freaXtyle will make another great work for the contest, he always gives us surprise XD

Yeah, Gissing! I hope you will be surprised a lot ))) 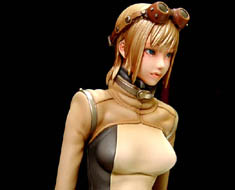 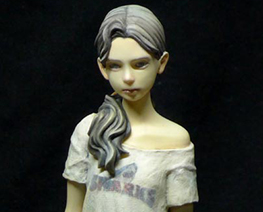